Astronomers have discovered a ring around the dwarf planet Haumea 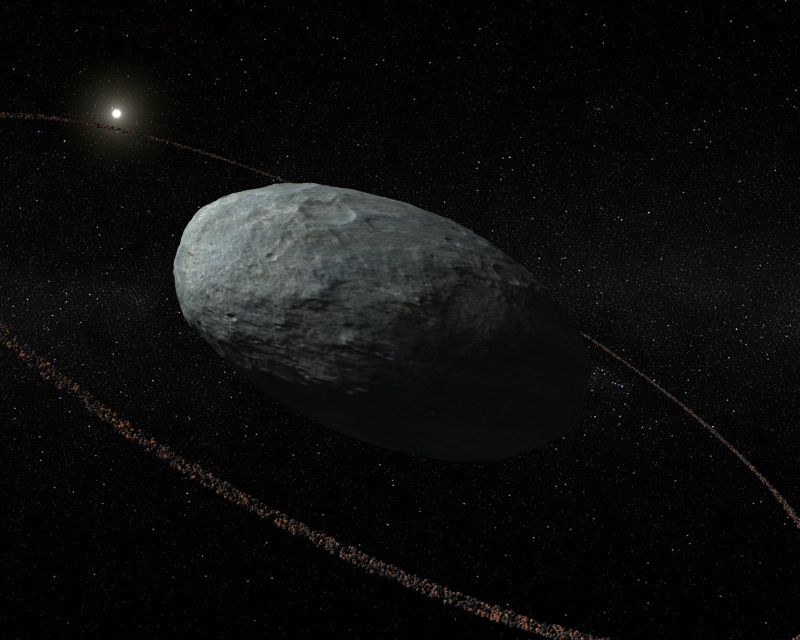 Scientists have discovered a ring around the unremarkable mini-planet of our solar system, thus debunking the idea that only giant planets can have such an “ornament”.

This planet, called Haumea, turns around the Sun far beyond the orbit of Neptune, the eighth and “furthest” planet of our planetary system, far from the Sun, since Pluto was “demoted” to the status of a dwarf planet in 2006.

Located at a distance of eight billion kilometers from the Sun, Haumea revolves around its own axis at great speed and has a flattened, cigar-like shape.

It makes one revolution around the Sun in 285 years.

“Our discovery confirms that there is much more diversity in our solar system than we are used to think,” said Bruno Sicardy, one of the authors of the new work from the Paris Observatory, France, in an interview with the news agency Agence France-Presse.

This new discovery was made when Sicardi and his team predicted the passage of the dwarf planet Haumea in front of one particular star, if conducted from the surface of the Earth, on January 21 of this year.

They sent to the dwarf planet 12 telescopes installed in 10 different observatories, and were able to measure many of the physical parameters of this planet discovered for the first time in 2004.

Scientists can determine the size and density of the planet by how much of the star’s light it blocks when passing in front of it. In the case of the dwarf planet Haumea, the researchers distinguished a dense ring, similar to the ring of Saturn, about 70 kilometers wide, which consists of ice particles. The planet has two satellites.

The work was published in the journal Nature.