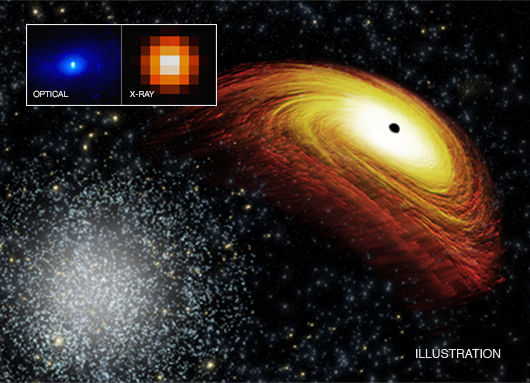 Supermassive black holes, as a rule, are stationary objects located in the centers of most galaxies. However, using data from NASA’s Chandra Space Observatory (NASA) and other telescopes, astronomers have recently discovered what could be a moving black hole.

This, perhaps, “runaway” black hole, whose mass is estimated at about 160 million solar masses, is located in an elliptical galaxy, lying about 3.9 billion light-years from the Earth.

The movement of this black hole can be related to the “recoil effect” that occurs when two smaller supermassive black holes collide and unite, forming a larger black hole. At the same time, as a result of this collision, gravitational waves radiated with greater intensity in one definite direction could be generated, as compared to all other directions. This newly formed black hole could receive a shock in the direction opposite to that in which the intensity of the emitted gravitational waves is maximal. This push could throw a black hole out of the galaxy, as shown in the illustration.

In a new work, a team of astronomers led by Dongchan Kim of the National Radio Astronomy Observatory, USA, discovered a “pushed out” black hole in one of the galaxies as a result of directed searches in scientific data obtained with NASA’s Hubble and Chandra space observatories “(Chandra), as well as the Sloan’s digital sky survey. The supermassive black hole is located in the case of this object not in the center of the galaxy, but at a distance of about 3000 light years from its center, as a result of which two bright blue dots are seen in the image taken with the help of Hubble in the optical range (on the sidebar on the left). In addition, the supermassive black hole gives its presence a bright glow in the X-ray (on the sidebar on the right).

An additional confirmation of the hypothesis of a moving black hole is that the parents of this black hole have found traces indicating that it was formed as a result of the fusion of two galaxies, namely, astronomers observed perturbations in the outer regions of the galaxy and an increased rate of star formation, In comparison with models.