Astronomers have discovered a star devouring the planet 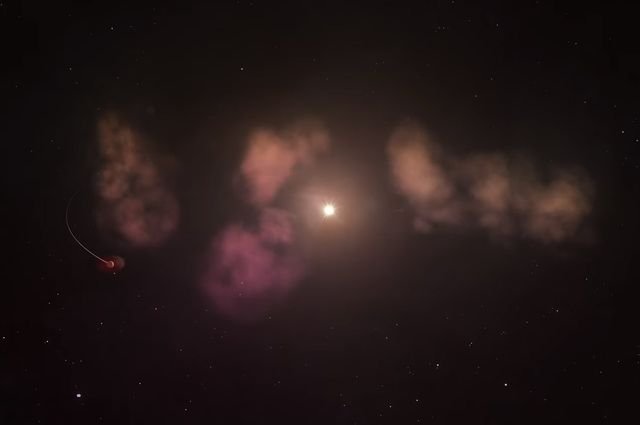 New data obtained by scientists from the University of California in Los Angeles, suggested that the unique flashing star RZ Piscium devoured the remains of the destroyed planets.

According to the researchers, the periodic changes in the brightness of the star located in the constellation Pisces at a distance of 550 light years from us are explained by the presence of a giant cloud of dust, which was formed from the remains of one or more planets.

Typically, large dust discs around the young star dissipate within a few million years. However, RZ Piscium – 30 million – 50 million years, and its flicker continues. Reducing the brightness of the star sometimes lasts a few days.

“I’ve been studying young stars for 20 years and have never seen anything like it,” says astronomy professor Benjamin Zuckerman. “Most sunlike stars lost their protoplanetary discs several million years after their birth. The fact that there are so much gas and dust around RZ Piscium after tens of millions of years means that the star may be occupied with the destruction, not the formation of the planets. ”

RZ Piscium produces more infrared radiation than the Sun. This indicates that the star is surrounded by a warm dusty disk. Approximately 8% of the total emitted energy of the star is due to infrared radiation. This is typical only for a small number of stars studied over the past 40 years.

According to scientists, the observations show that huge clusters of dust and gas surround the star, blocking the light from time to time, and perhaps they twist towards the luminary.

Although the collision of the planets is considered as the most probable explanation for the appearance of a dust disk around the RZ Piscium, according to astronomers, it can not be ruled out that the star abducts matter from its companion star.