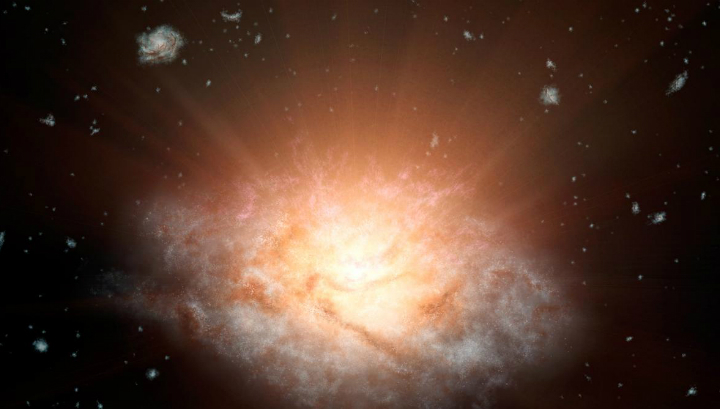 Scientists using a telescope Hubble found a unique galaxy. It is not spiral, but not elliptical, say astronomers who worked under the guidance of Peter van Dokkum of Yale University. Moreover, it is as big as ours (the Milky Way galaxy), but it has very little dark matter – only 1/400 of the volume predicted by scientists.

The galaxy is called NGC1052-DF2. It is 65 million light-years away. Judging by the color of the star clusters, it is 10 billion years old.

The newly discovered galaxy is called “ghost”, since it has too little dark matter. From this matter 85% of the Universe consists, scientists believe, and in each of the galaxies “in norm” is 8-10 times more dark than visible matter. Astronomers claim that dark matter was almost absent in those galaxies that emerged first – formed immediately after the Big Bang.

Previously, scientists believed that the universe consists only of visible objects – stars, planets, accumulations of dust, nebulae, black holes. However, in the seventies of the last century an important observation was made: at the outskirts of the nearest galaxies, the stars move with a huge speed that is ten times higher than the calculations. Such a speed could not be explained by the influence of visible objects-a powerful gravitational effect appeared on the stars, which took “nowhere”. This phenomenon helped to explain dark matter – a hypothetical substance holding stars in place and preventing them from “scattering”.