Astronomers have discovered a “triple” Tatooine 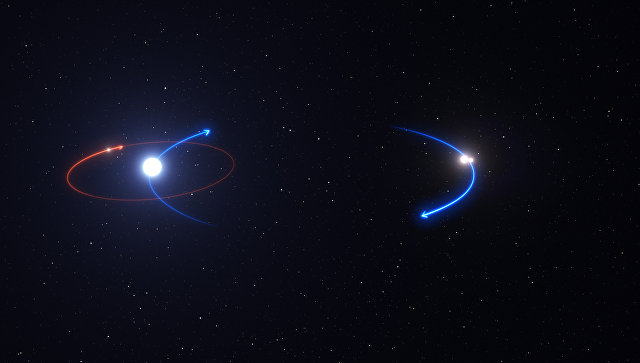 Planetary scientists first discovered the planet, which rotates once around the three superstars, which makes it a kind of “triple” analogy of Tatooine, the birthplace of Luke Skywalker from “Star Wars.”

The so-called “Tatooine” – planets that orbit two stars are relatively rare. Since the first such planet found by a telescope “Kepler” in 2011, found only 10 “Tatooine” in eight star systems. Scientists attribute their rarity that such planets are extremely difficult to see with telescopes available today.

“About half of the year on this planet, which lasts 550 earth years, her sky visible from three stars. Two less bright lights are always located close to each other, and the third star, then closer, then away from them. At the time when these stars are together, they generate a unique triple sunsets and sunrises, and in other cases the same lamp sunset is accompanied by the sunrise of another. At this time, a day lasts on this planet for 140 years,” said Kevin Wagner Kevin Wagner of the University of Arizona in Tucson (USA).

Wagner and his colleagues found an example of an extremely unusual “Tatooine”, which can be in a separate class of exoplanets, watching a herd of young stars at the junction of the constellations of the Scorpion, the centaur and the Wolf with the help of a telescope (VLT), installed at the Observatory, Paranal in Chile and the tool SPHERE is able to see the thermal “shadow” planet.

Scientists were interested in two things – how often “Tatooine” and can I see them directly with optical telescopes, what is often questioned by many other scientists. Watching about a hundred young stars in the so-called Association Sco OB2, whose age does not exceed 16 million years, planetary scientists have found an extremely unusual answer to both of these questions.

The fruit of their search was the star system HD 131399 – a family of three young stars, distant from us 319 light years. The larger star in the system is almost two times heavier than the Sun, and the lesser luminaries revolving around him at a distance of about 6 times larger than Pluto around the Sun, somewhat inferior to him in mass.

Around the larger star at a distance of 80 astronomical units, the average distance between the earth and the Sun, rotates the large planet”Tatooine” HD 131399Ab, whose mass is approximately four times larger than Jupiter. Life on its surface or in its satellites is hardly possible – due to emission from the three stars, its average temperature exceeds a hell of 850 degrees Kelvin (576 degrees Celsius).

The discovery of the planet in this configuration of stars and this place was a complete surprise for the scientists – according to them, the slightest shifts its orbit in the direction of greater stars or a pair of smaller bodies would destabilize it, and HD 131399Ab would have been ejected from the system.

“It is not clear how this planet was at such a distant orbit in this extreme stellar system, and we can’t say how its discovery changes our ideas about planetary systems in the Universe. On the other hand, its discovery shows that a variety of “species composition” is much higher than believed by many colleagues. “Tatooine” remains poorly understood and it is possible to say that they may be the same as planets around single stars,” concludes Wagner.