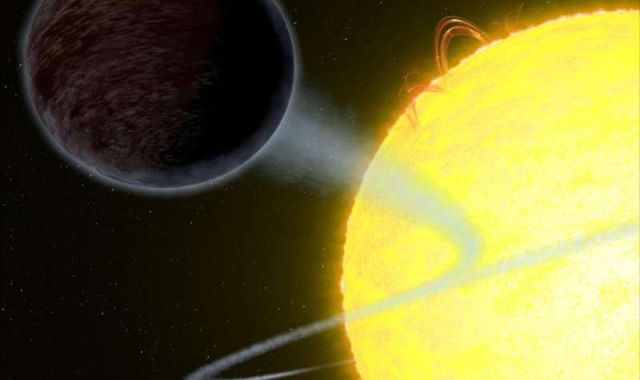 Astronomers have discovered that the previously discovered exoplanet WASP-12b almost does not reflect light. The discovery was made by an international team of scientists who analyzed the data obtained by the STIS spectrometer of the Hubble Space Telescope.

The researchers found that the WASP-12b albedo is 0.064, which is 2 times less than that of the Moon, whose albedo is 0.12. Thus, this exoplanet was darker than fresh asphalt.

WASP-12b revolves around the sun-like star WASP-12A, located about 1.4 thousand light-years from the Earth. Exoplanet was discovered in 2008. Its radius is almost twice the radius of Jupiter. One revolution around the star exoplanet commits in one day. WASP-12b is classified as a hot jupiter. Since the planet experiences a strong gravitational influence of its star, it has an ovoid shape. The temperature on the star-lit side is 2.6 thousand degrees Celsius.

Scientists believe that a small albedo is due to the high temperature of the planet. If, in the case of other dark planets, it could be assumed that they are enveloped in clouds and alkali metals that contribute to the absorption of light, then in the case of WASP-12b, the situation is different, because this planet is too hot to form clouds. And with alkali metals there would be ionization.

WASP-12b – the second planet, which managed to measure the albedo. The first was another hot Jupiter HD 189733b.