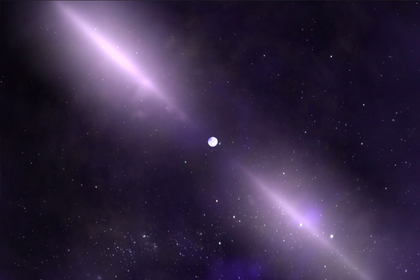 An international group of astronomers from France, the Netherlands, the United Kingdom, South Africa, Australia and Russia discovered an unusual pulsar with a rotation period of 23.5 seconds, making it the slowest object of its kind known. In addition, earlier it was believed that pulsars with such a large period of rotation simply can not exist. Details of the opening are given in the preprint, published in the repository arXiv.org.

Until now, the rotation periods of all known pulsars have ranged from 1.4 milliseconds (fastest) to 12.1 seconds (slowest). One of the tools for searching for these objects is the giant radio telescope Arecibo, but the detection of slow pulsars is difficult due to the presence of low-frequency “red” noise. Algorithms used to “clean” noise, reduce sensitivity to long-period pulsars, and the duration of observation of one object often does not exceed several minutes. Slowly rotating pulsars are more often detected by the emission of high-energy radiation (X-ray), for example, magnetars and XDINS (X-ray Dim Isolated Neutron Stars).

The PSR J0250 + 5854 was detected using the LOFAR (LOw Frequency ARray) international radiointerferometer, and was observed through other telescopes, including the Green Bank Telescope radio telescope and the ROSAT and Swift X-ray space observatories. By the magnitude of the dispersion measure (DM), which determines the number of refracting electron beams between the observer and the pulsar, scientists have determined the distance to the neutron star, which is about 1.6 kiloparsec (more than five thousand light years).

The plot of the period of rotation of the pulsar and the rate of deceleration of the pulsar shows that PSR J0250 + 5854 is behind the so-called death line, when a neutron star seems to stop emitting radio emission. One of the hypothetical mechanisms for the generation of radio waves is the creation of particles and antiparticles at the pulsar poles, in the vacuum region, where the electric and magnetic fields are not orthogonal and capable of maintaining a high potential difference. However, for a sufficiently long period of rotation, the potential difference is no longer sufficient for the production of pairs and radio waves.

According to another model, a part of the energy released with a slowing down of the rotation of the pulsar can be “spent” with maximum efficiency on the creation of radio emission. This creates a “valley of death” in which objects such as PSR J0250 + 5854 can still exist, bypassing the traditional lines of death. Thus, physicists conclude, there must still be many pulsars with an extremely long period of rotation.