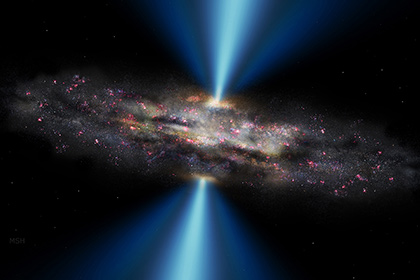 Giant black hole located in the center of most major of galaxies affect their evolution and stop star formation in galaxies. To such conclusion the group of scientists, leading Slanovskiy digital sky survey. The results published in the Nature magazine, briefly about it according to a press release from MSU, arrived in edition “Tapes.ru”.

International a group of scientists that includes a member of the State astronomical Institute named after Sternberg (Sternberg astronomical Institute), Dmitry Bizyaev, found examples of how giant black holes in the centre of a large galaxies heat the gas coming from the outside, without letting it cool down, to settle and form stars.

In their work, scientists examined several star clusters examined by the review team close galaxies MaNGA (Mapping Nearby Galaxies at Apache Point Observatory). Astronomers have discovered large galaxies located at a passive stage of evolution (so-called “red and passive”), which are not born stars and no gas.

“Panoramic spectroscopy allowed us to see the flows of preheated gas, which in the form of broad cones hit from the centres of these galaxies. Building material are: it is seen that the gas comes from intergalactic space, but do not have time to cool, settle and to form stars, and ejected from the system due to the activity the Central object,” explained Bizyaev.

The prototype of such objects is a pair of galaxies, which astronomers from MaNGA gave proper names — Akira and Tetsuo (in honor of the heroes of Japanese manga “Akira”). Tetsuo — Akira low-mass component. Scientists noticed that the cold gas from the galaxy-the satellite falls on the main galaxy with star formation. However, the Central supermassive a black hole heats up and throws him back in intergalactic space.

The authors call this effect “red geyser” and guess he may be one of the typical mechanisms regulating the inflow and outflow of gas, and most importantly — suppressive star formation in galaxies. This process can be enabled on short time and probably quite common in the Universe.