Astronomers have discovered complex organic matter in the stellar “embryo” 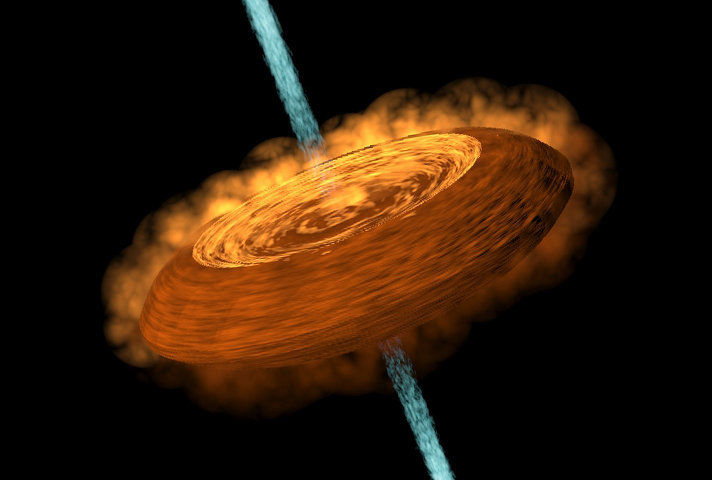 According to modern astronomers, the deposit of all stars and planets is cold nebulae from gas and dust, which contain neutral hydrogen, helium and dust. Due to the unevenly distributed gas in these nebulae, over time it begins to thicken with dense lumps – peculiar star “fetuses”.

Slowly but surely, the gas and dust contained inside these lumps turn into an accretion disk, flattening to the state of a flat “pancake”, in the center of which a star begins to form, and on its outskirts – planets. Until now, scientists knew nothing about the origin of such a “pancake”, because his birth was instantaneous, and the period of existence, taking into account the space standards, lasted for a very short time.

A visual “sample” of such an unusual disk scientists discovered in April this year, it was the prototype of the NN 212 in the constellation of Orion, which had the form of a not quite flat “pancake”, rather a kind of giant bagel or a hamburger. It was found that its formation began about forty thousand years ago, because of which many astronomers began to observe it, hoping to unravel the secrets of the initial stages of the birth of new stars.

Chinese astronomer Chin-Fei Lee of the Institute of Astronomy and Astrophysics of Taiwan explained that for this kind of research observations only microwave or infrared telescopes are possible, because the star “germ” can not be seen through the gas-dust cocoon surrounding it.

For this purpose, Lee’s team chose the world’s most powerful microwavescope ALMA. Its capabilities allow one to “catch” one of the coldest particles of dust and gas molecules due to their constant movement. Controling these “movements”, it becomes clear to scientists how the newborns of the luminaries “dine” with gas from the protoplanetary disk, in parallel throwing it out by narrow glowing bundles of jets.

Just at the time when Chinese astronomers were studying such gas emissions, in dense gas clouds at the top and bottom of the “hamburger” of the star, they suddenly discovered a colossal amount of “alcohol” molecules, including molecules of methanol and some esters. Scientists believe that in an open space these molecules were after the birth star with its heat and light melted them from the surface of the “ice” grains in the accretion disk.

The importance of this discovery lies in the fact that the substances found are billets for the formation of amino acids, the so-called “life blocks”, which, in the opinion of planetologists, are the “key” to the life that has arisen on Earth. And the complex organic matter present in the protoplanetary disk during its very initial development testifies to the possibility of the origin of life in almost every star.