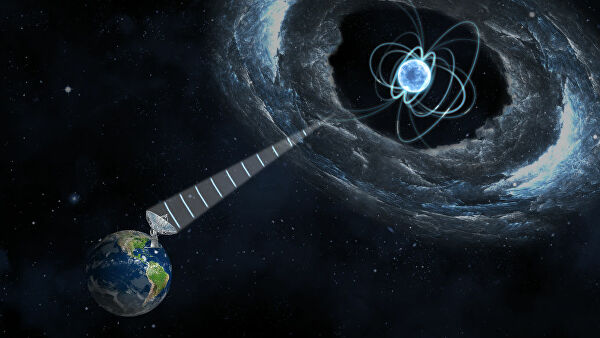 In its first year of operation, the Canadian Radio Wave Observatory CHIME discovered more than five hundred fast radio bursts (FRBs), mysterious short radio signals of enormous power, whose study indicated the existence of two different types of sources of such flares. This was announced on Wednesday by the press service of the Massachusetts Institute of Technology (MIT).

“Before the construction of CHIME, we knew about the existence of about a hundred FRB bursts. In just a year of observations, we discovered several hundred sources of single and repetitive radio signals, whose study will allow us to clarify the nature and physical mechanisms of the formation of these flares,” said MIT researcher Caitlin Shin , whose words are quoted by the press service of the university.

A kind of “alien radio signals”, mysterious FRB bursts, were accidentally discovered in 2007 while observing pulsars at the Australian Parks Observatory. They are very short radio signals with an inexplicable periodic structure, the source of which is located at a great distance from the Earth, some of which are repeated and others are not.

A year ago, Chinese and Canadian astronomers found the first hypothesized source of similar bursts, located inside our Galaxy. It turned out to be the magnetar SGR 1935 + 2154, a “magnetized” neutron star located in the constellation Arrow on the opposite side of the Milky Way, at a distance of 30 thousand light years from Earth.

Despite the fact that this discovery confirmed the most generally accepted hypothesis about the formation of these signals, astronomers cannot yet say for sure whether all FRB flares arise in this way and why only some of them recur. Scientists are trying to solve this problem using the Canadian CHIME telescope, built in 2017 specifically for observing “alien radio signals” and cosmological research.

As Shin noted, the telescope’s science team recently completed an analysis of the data collected with its help during the first year of CHIME’s operation. This allowed scientists to identify a large number of FRB bursts that were not initially detected in 2018 and 2019, as well as to study their nature in detail and estimate the distance to their sources.

In total, scientists managed to find 535 previously unknown fast radio bursts, among which there were 18 recurring FRB flares at once. This more than doubled the number of known sources of this type of “alien radio signal” – in the past, scientists knew about ten such objects existed.

The study of their flares, according to Shin, allowed scientists to discover for the first time some significant differences in the behavior of repetitive and single sources of FRB flares. In particular, astronomers found that repetitive signals last slightly longer, and their radiation was concentrated in a narrower part of the spectrum.

This, according to the members of the CHIME research team, testifies in favor of the existence of two different types of FRB burst sources, one of which generates single “alien radio signals”, and the others – repetitive signals. Magnetars claim to be the latter, while the sources of single flares still remain a mystery to astrophysicists.

Follow-up observations at CHIME and other major radio telescopes in the world, Sheen and her colleagues hope, will help scientists find an answer to this question and uncover the physical mechanisms responsible for generating both types of “alien radio” signals.