Astronomers have discovered that double stars are spitting on planets 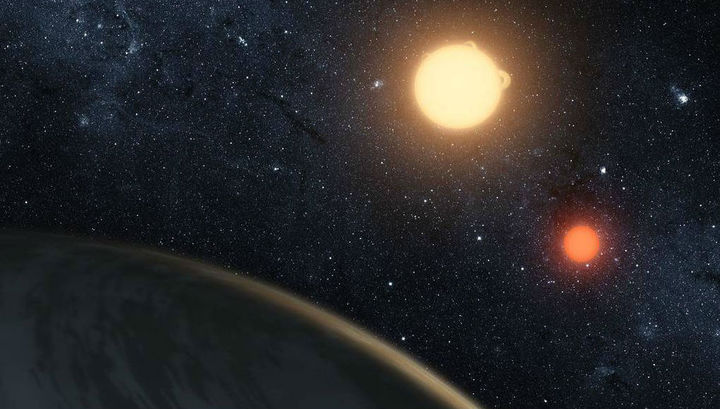 A team of scientists from the University of Washington, led by Thomas Quinn (Thomas Quinn), found out why planets are so rarely found in close binary star systems. The point is that with time the orbits along which the luminaries move around the common center of mass expand. The planets fall into a zone where stable trajectories are impossible, and fly away from the system. The preprint of the article accepted for publication in the Astrophysical Journal is available at arXiv.org.

More than 3,700 planets are known to mankind. And almost all of them turn around single stars, although the latter constitute a minority in the Galaxy. What’s the matter?

The answer to this question was sought by the Quinn group. Specialists modeled the behavior of such systems using a supercomputer. At the same time, they confined themselves to close binary systems, in which the period of revolution of stars around the common center of mass does not exceed ten terrestrial days. Although this is only a special case of binary systems, there are many such stars in the Galaxy.

It turned out that the problem in the field of space, which can be called the zone of instability. The planet can not be to its double sun closer than a certain limit. Behind this feature, stable orbits are impossible, and the exoplanet, having received a gravitational “kick”, simply flies into space.
“There is an area that you simply can not cross: if you get there, you will be thrown out of the system,” explains David Fleming, the first author of the study, in a university press release. “We confirmed this in simulations, and many others [astronomers] also studied this area. ”

The existence of an instability zone is not in itself news for specialists. But the Quinn group discovered that this area moves with time, and this can be disastrous for the planets.

As the simulation showed, tidal forces gradually change the face of the system. Rotation of stars around its axis slows down, but increases in size of their orbit. The instability zone around the orbit moves after this expansion, and the planets that originally were, so to say, safe, enter it.

Moreover, sometimes the “loss” of one planet can lead to the destruction of the entire system. The gravity of one world influences the movement of all the others, so that the principle of dominoes or, if you like, a house of cards can work. The first planet hit the zone of instability and flew away, the second in the changed gravitational situation also lost a stable orbit, and so on.

By the most cautious estimates of the authors, 87% of planetary systems in close binary stars eventually lose at least one planet. In fact, it can be about 99%, and in one world the matter is often not limited.

However, some such systems still find. Do these discoveries refute the construction of researchers? Scientists have tested their models on the most extreme example. In the Kepler 47 system, the planet revolves around a pair of stars with a period of only 7.45 Earth days. It turned out that this particular system may well exist, since the planet is still outside the zone of instability.

Are the results obtained that hunters behind planets can put a fat cross on tight double systems? Of course no. After all, the planets of the double sun can be so far from it that even after the expansion of the orbit they will not enter the danger zone.

Why are such worlds not found in the multitude? The answer is very simple. Any methods of searching for exoplanets work the better, the closer the world to its star. In addition, in order to confidently talk about the existence of the planet, you need to observe at least a few of its revolutions around the luminary. And this means that the mass discoveries of the worlds, in which the “year” is close to the earthly one or exceed it, are waiting for us ahead.