Astronomers have discovered the unusual composition of Borisov’s comet 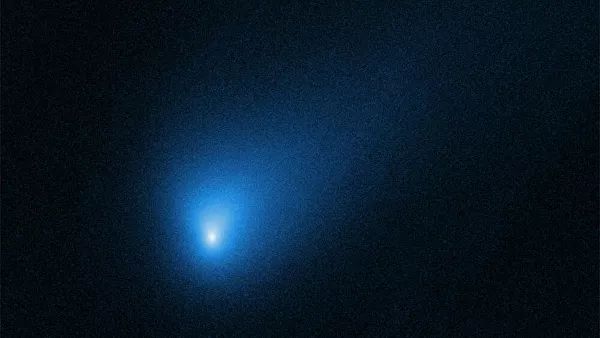 For the first time, scientists have deciphered data indicating the chemical composition of the nucleus of Borisov’s comet. It turned out that it does not resemble the composition of the comets of the solar system. The results are published in the journal Nature Astronomy.

Comet 2I / Borisov is the second cosmic body after the asteroid Oumuamua to fly into the solar system from the interstellar medium. Initially, astronomers claimed that its composition was generally identical to the comets of the solar system, but more detailed observations made with the ALMA complex of radio telescopes located in the Chilean desert of Atacama showed that this is not so.

“This is the first time we have looked inside a comet from outside the solar system,” quoted a press release from the National Radio Astronomy Observatory as saying by research leader Martin Cordiner, an astrochemist at NASA’s Goddard Space Flight Center, “and she dramatically different from most other comets we’ve seen before. ”

For the first time, the ALMA complex performed direct analyzes of the chemical composition of the gas emitted by comet 2I / Borisov on December 15 and 16, 2019. Astronomers have discovered hydrogen cyanide (HCN) and carbon monoxide, or carbon monoxide (CO) in it. At the same time, the latter was present in very large quantities — 9–26 times higher than that of comets of the Solar System located at a similar distance from the Sun — within 2 AU, or less than 300 million kilometers. According to researchers, this suggests that Borisov’s comet formed in an extremely cold environment.

“The comet must have formed from a material that is very rich in ice CO, which is present only at the lowest temperatures found in space, below -250 degrees Celsius,” said planetary scientist Stefanie Milam, the second study leader .

Comets are interesting in that their internal composition, unlike planets, has not changed significantly since their birth. Therefore, they could tell a lot about the processes that occurred during their birth in protoplanetary disks.

Carbon monoxide is one of the most common molecules in space; it is found in most comets. However, there is a huge variation in CO concentrations in comets in the solar system, and no one knows why. This may partly be due to the fact where a particular comet was formed within the solar system, or how often the comet, due to its orbital parameters, approaches the Sun, whose heat evaporates carbon monoxide from the surface of the comet.

In many ways, the discovery was made possible thanks to the unique technical capabilities of ALMA – the first telescope that was able to measure the content of substances in gases originating directly from the core of an object that came to us from another planetary system.

“Only thanks to the unprecedented sensitivity of ALMA at submillimeter wavelengths can we characterize the gas emanating from such unique objects,” explains another author of the article, Anthony Remijan from the National Radio Astronomy Observatory.

According to the authors, Comet 2I / Borisov was formed far from its mother star, in the cold region of icy bodies, which can be compared with the Kuiper belt in the Solar System, located beyond the orbit of Neptune. Concerning whether a comet appeared in the planetary system, one can only speculate, scientists say.

“Most of the protoplanetary disks observed by ALMA are around young small-mass stars such as the Sun,” Cordiner explains. “Many of these disks extend far beyond the region where our own comets are thought to have formed and contain a large number of extremely cold gas and dust. It is possible that Comet 2I / Borisov came to us from one of these large disks. ”

The high speed with which the comet passed through the solar system – about 33 kilometers per second – gives astronomers reason to believe that it was thrown out of its system when interacting with a passing star or giant planet. She then spent millions or billions of years traveling through cold interstellar space before August 30, 2019, when she was seen by Russian amateur astronomer Gennady Borisov.