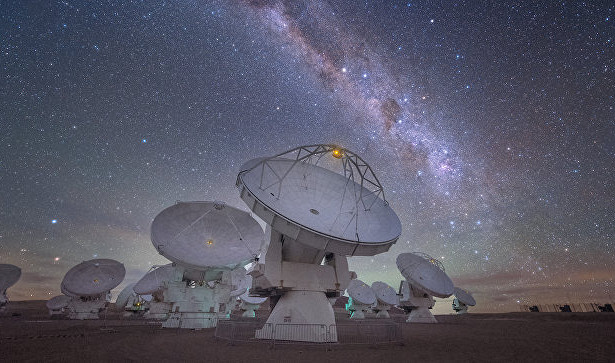 The Fermi orbital telescope has found further evidence that the alleged traces of “dark matter” in the center of the Milky Way were generated by ordinary stars, rather than the decays of particles of this mysterious substance. Their findings were presented in the journal Nature Astronomy.

“It was extremely important for us to know how this area of ​​excess gamma radiation is arranged and where it is located, as well as what its spectrum looks like, without that we could not understand what exactly this glow generates – the decay of particles of dark matter or ordinary astrophysical processes in the center of the Milky Way, “said Christophe Weniger of the University of Amsterdam in the Netherlands.

Dark matter is an invisible substance, the presence of which can be judged only by its gravitational effects. It does not interact with electromagnetic waves, that is, it does not emit, absorb or reflect any radiation. Common matter accounts for 4.9% of the mass of the universe, and its dark “cousin” – 26.8%. Most physicists today believe that dark matter can consist of heavy, weakly interacting particles, the so-called “WIMPs.”

In 2009, as it seemed to scientists, the recently launched Fermi gamma-telescope detected the first traces of dark matter in the form of a mysterious excess of gamma radiation in the center of the Milky Way, whose brightness in the high-energy part of the spectrum was much higher than the theoretically predicted values. As scientists assumed then, the source of this radiation was the decay of the colliding “WIMPs”.

Subsequent observations using Fermi, as well as data from the NuSTAR X-ray telescope, led scientists to question this hypothesis. The fact is that these surpluses were distributed on the core of the Galaxy not evenly, as the theory indicates, but in a “pointlike” way. This indicated their possible source – millisecond pulsars, young neutron stars.

Veniger and his colleagues found a witty way of proving that this is so, drawing attention to one characteristic feature that will link such “dead” luminaries with an excess of gamma radiation and which will not be present in dark matter – the connection between the power of this glow and the mass of stars.

If pulsars and black holes do generate this signal, then it will be stronger in places where stars cluster, and weaker ones – where there are none or relatively few. Despite the simplicity of this idea, scientists needed to observe the center of the Milky Way for eight years in order to accumulate enough data to verify it.

Using images from Fermi, the scientists processed them using a special algorithm that compared the masses of stars in different parts of the center of the Galaxy and how bright they looked in the gamma range.

It turned out that such a relationship between the number of stars and the glow strength of the Galaxy did exist, and it was very strong. The probability of an accidental coincidence of this kind is one chance for a virtually countless number of attempts, a number with 57 zeros.

The data collected by the gamma telescope, as the scientists hope, will help the world’s largest radio observatories, such as MeerKAT and SKA, to get the first photographs of these pulsars and prove that they really exist. In this case, physicists will have to look for another source of dark matter and variants of its decay.