Astronomers have figured out how giant river canyons appeared on Mars 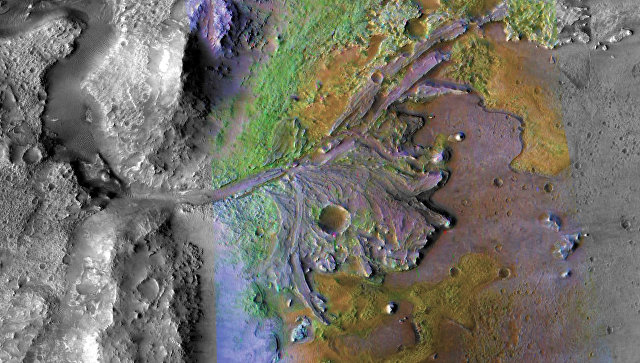 Large canyons on Mars did not arise as a result of the constant flow of rivers, but due to the “great floods” that arose when the walls of crater lakes on Mars were collapsed. Their photos and descriptions were published in the journal Geology.

“Such terrain features are quickly disappearing from the face of the Earth, but on Mars, where there is no tectonics and water erosion for a long time, these canyons have existed for 3.7 billion years and have survived to our original form. Now we have the opportunity to study how giant water flows moved on its surface in the distant past, “- says Caleb Fassett (Caleb Fassett) from the NASA Marshall Space Flight Center (USA).

In recent years, scientists have found many hints that rivers, lakes and whole oceans of water existed on the surface of Mars in ancient times. On the other hand, some planetologists believe that even in ancient times Mars was too cold for the permanent existence of the oceans, and its water could be in a liquid state only during times of volcanic eruptions that were extinct billions of years ago.

Recently, these views have been shaken – planetologists have found photographs of some Martian craters at the equator of the red planet, such as Istok and Yezero, and in the northern polar latitudes, such as Lyo, traces of water flow, which, by geological standards, have recently been several dozen or hundreds of millions of years backward, moving on the surface of mars.

This discovery led many scientists to guess how liquid water could get to the surface of Mars and survive there long enough to form a network of deep and very long and branched canals in rocks near the slopes of these craters.

These disputes, as noted by Fassett, are largely due to the fact that scientists do not yet know exactly how these canyons were born. Their “parents” could be both relatively shallow and slow river waters, which carved out these canals over many millions of years, and the “great floods” that hit billions of tons of water on the mountains in a matter of hours and days.

Fassett and his colleagues found out that the second theory was closer to the truth, studying detailed images of the edges of the Jester crater, recently obtained using the HiRISE camera installed on board the MRO probe. This crater could be one of the landing points of the Mars-2020 rover, which forced NASA scientists to study it in detail again.

Using these images, planetologists created a three-dimensional model of Jezero, which helped them to assess how much water could pass through each part of these canyons, taking into account the differences in height between their different sections and the Martian force of attraction.

If these channels arose as a result of a gigantic flood, then it would be logical to assume that their volume corresponds to how much water passed through them at the time of their formation. Accordingly, closer to the walls of the crater, these canyons should be wider and deeper, and in more distant regions they will be noticeably smaller.

In the same case, if they were flowed by the waters of the rivers, then the “throughput” of the canyon will depend mainly on the local topography, and not the distance to the edge of the dilapidated crater.

As the pictures from the MRO showed, the size of the channels was indeed related to the distance to the walls of Yezero, which indicated their “flood” origin. On the one hand, this suggests that large reservoirs could indeed exist on Mars, but on the other, it does not yet confirm that they could exist for quite a long time, scientists conclude.