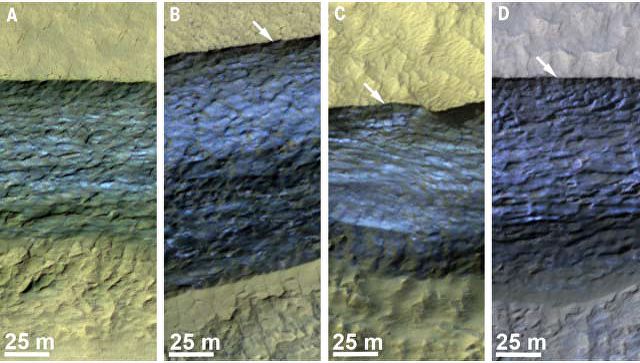 Planetologists have discovered eight large surface ice deposits in the temperate and circumpolar latitudes of Mars that contain enough water to build bases and study the past of the red planet, according to an article published in the journal Science.

“Near-surface ice reserves, which we found, most likely began their life in the form of snow deposits, which were pressed into giant glaciers, now hidden beneath a two-meter layer of” cement “from frozen dust and soil .The small depth of these glaciers makes them attractive for future travelers and the study of the climatic history of Mars, “writes Colin Dundas of the USGS.

Recent observations of Mars with ground-based telescopes have shown that in the past 3.7 billion years, Mars lost an entire ocean of water, which would be enough to cover the entire surface of the red planet with a 140-meter-thick ocean. Where this water disappeared, scientists are trying to figure out today, studying the ancient Martian meteorites.

Dundas and his colleagues found serious hints that most of these “missing” oceans of Mars could not evaporate into space, and still hides in shallow depths in its depths, studying images of the circumpolar and temperate latitudes of the red planet that the MRO probe was receiving over the past three years.

As the scientists say, the first measurements carried out with the help of the Russian neutron detector HEND, installed on board the Mars-Odyssey probe, showed that about one-third of the surface of Mars contains significant reserves of ice or other forms of water. These discoveries led scientists to assume that these ice should be hidden at a relatively shallow depth where the Russian device could “see” them, and that winds, landslides and other forms of soil erosion could expose them.

Guided by this idea, planetologists have observed for three years how the appearance of the slopes of several hundred hills and dunes changed in the high latitudes of Mars facing the poles. These efforts were justified, and Dundas’s team managed to open eight large deposits of surface ice that had been recently “exposed” by wind and other weather phenomena.

Seven of them are in as yet unnamed craters on the Prometheus plain in the southern hemisphere of Mars, and the eighth are in the Milankovich crater in the circumpolar part of the northern hemisphere of the planet. Each of these ice bands, according to current estimates of scientists, has a length of several kilometers and a thickness of 100-130 meters, indicating that there are impressive water reserves in them.

As the most detailed images with MRO show, these ice deposits have a heterogeneous, layered structure, which indicates that within them there are traces of the Mars climate variations in a relatively recent and distant past. Their study by future Martian colonists or by rovers will help scientists understand how Mars has turned into a cold and lifeless planet devoid of water.