Astronomers have found a galaxy-Frankenstein 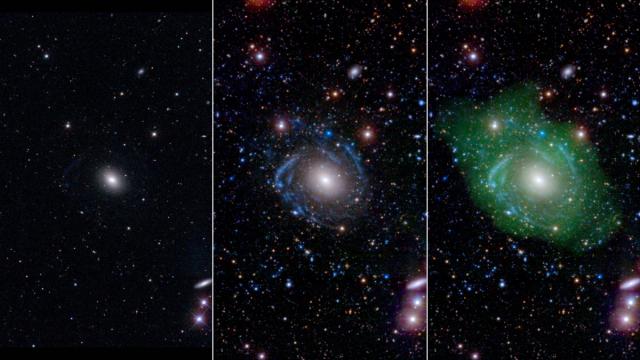 At a distance of about 250 million light years from Earth astronomers have discovered an unusual galaxy that was different from the others. According to scientists, it was formed from parts of several galaxies.

Initially it was thought that the galaxy UGC 1382 is old, small and quite common. However, observations using space and ground-based telescopes showed that it is 10 times more than previously thought. Moreover, unlike most galaxies the inner region was younger than external.

“This rare galaxy-Frankenstein managed to survive due to the fact that it is located in a relatively “quiet” region” – says one of the authors of mark Seibert.

Astronomers have discovered the galaxy by accident. The researchers studied the stars, resulting in typical elliptical galaxies. Scientists assumed that the galaxy UGC 1382 is one of them. However, the images of the galaxy obtained by the apparatus of GALEX in the ultraviolet range showed that she has spiral arms, which the elliptical galaxy should not have. The observation of this unusual galaxy is connected to other telescopes, which have received additional data in the infrared and visible range.

It turned out that the size of the UGC 1382 is approximately 718 thousand light years, which is more than seven times the size of our milky Way. Galaxy is a rotating disk of a rarefied gas. So the stars it is not formed quickly. However, most of the galaxy has surprised scientists the age of its components. In most galaxies the inner region contains old stars. As its growth in the outer region is the formation of new, younger stars. In the case of UGC 1382 it was the opposite.

The Central part turned out to be younger than the surrounding spiral disk. According to scientists, the two parts of the galaxy were formed independently from each other. They had “their own path of development,” before merge. First, there was probably a group of small galaxies, consisting mostly of gas and dark matter. Later in the neighborhood formed a lenticular galaxy is a rotating disk with spiral arms. More than 3 billion years ago, a small galaxy surrounded lenticular galaxy and bond with her.