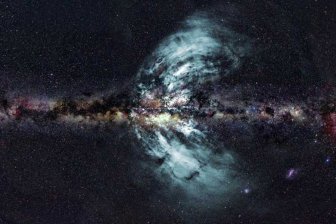 The spur seen in the northern part of the Milky Way known as the North Polar Hole, and the fan-shaped region at the opposite end of the sky visible from Earth are elements that can be linked by an extensive network of magnetized “filaments”. This is the assumption made by the authors of a study published in the pages of The Astrophysical Journal.

The North Polar Hole and Fan Region, located at opposite ends of the sky, can be linked by a system of magnetized “filaments” and form a structure that resembles a giant tunnel. Astronomers believe that this tunnel surrounds not only the Sun with planets, but also neighboring stars.

“If we could see the radio waves, we would clearly see this tunnel by looking into the sky. It stretches in almost all visible directions,” says Jennifer West, an astronomer at the University of Toronto, Canada.

The North Polar Shpur and Fan Region were discovered in the sixties of the last century – it is believed that these are supernova trails. Until now, scientists have not connected these objects to each other, but the authors of the new work analyzed the magnetic filaments that connect the objects, and found that these are parts of a single structure that resembles a tunnel. Researchers now have to learn how these grandiose magnetic structures are formed and maintained.