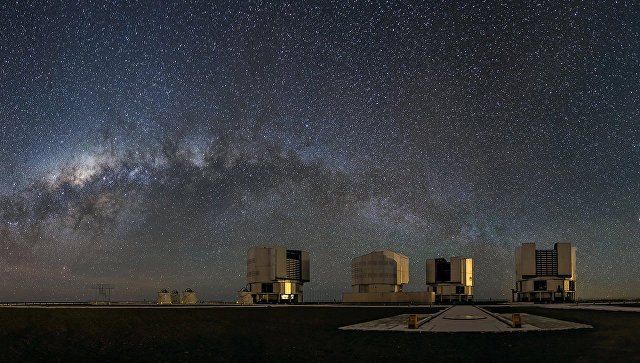 Mysterious gamma radiation emanating from the center of the Galaxy generates young neutron stars that live in the densest region of the nucleus of the Milky Way, rather than the decays of particles of dark matter. This conclusion was reached by astrophysicists who published an article in the journal Nature.

“At a similar distance, the individual gamma-ray streams generated by these dead stars will merge and form a uniformly distributed signal, similar to the one that should appear in the decay of particles of dark matter.” In favor of this is the fact that millisecond pulsars located nearby from the Earth, are considered bright sources of gamma rays, “said Roland Crocker of the Australian National University in Canberra.

Dark matter is an invisible substance, the presence of which can be judged only by its gravitational influence, it does not interact with electromagnetic waves, that is, it does not emit, absorb or reflect any radiation. The share of ordinary matter accounts for 4.9% of the mass of the universe, for dark matter – 26.8%. Most physicists today believe that dark matter can consist of heavy weakly interacting particles, so-called “WIMPs.”

In 2009, as it seemed to scientists, the recently launched Fermi gamma-telescope detected the first traces of dark matter in the form of a mysterious excess of gamma radiation in the center of the Milky Way, whose brightness in the high-energy part of the spectrum was much higher than the theoretically predicted values. As scientists assumed then, the source of this radiation was the decay of the colliding “WIMPs”.

From the point of view of astrophysics, it is quite easy to disprove this theory-for this it is necessary to show that gamma-photons from the center of the Milky Way fly to us from point sources of light, which can be pulsars and other compact objects. Otherwise, if they are generated by decaying particles of dark matter, the “excess” radiation will be distributed uniformly across the sky.

Crocker and his colleagues found the first evidence in favor of this theory by analyzing the images that the Fermi telescope received over the last few years of observations of the center of the Galaxy. Scientists have processed them using special statistical algorithms that can “remove” all non-point sources of gamma-waves, and tried to understand what gives rise to all its other outbreaks.

To this end, astrophysicists created several dozen computer models of the Galactic nucleus, in which the role of point sources of gamma radiation was played by a variety of objects – pulsars, black holes, ordinary stars and clouds of interstellar gas. By combining these models and comparing the results of their calculations with real photographs from the “Fermi”, scientists tried to understand which one is closest to the truth.

For example, on the gamma photos of the bulge, the densest part of the core of the Milky Way, you can see a kind of drawing resembling the letter X. This letter, as scientists explain, arose because of the unusual distribution of stars along the central part of the Galaxy, the reason for which is not yet clear.

A similar structure, as the calculations of Australian astrophysicists show, arises in their models in the case when the role of the main source of mysterious gamma radiation is played not by dark matter or ordinary stars, but by the so-called millisecond pulsars living both inside the bulge and outside it .

So astronomers call relatively young neutron stars that have lived no more than 100 million years and have a huge speed of rotation – they make one revolution around their axis in a few tens or hundreds of milliseconds. When clusters of matter fall on the surface of such pulsars, powerful flares of gamma radiation and other electromagnetic waves appear.

Previously, astronomers believed that such luminaries can not be present in large numbers in the center of the Galaxy due to the venerable age of most of its stars, but the calculations of Crocker and his team indicate the opposite. As the scientists hope, further observations of the galactic “cross” and individual pulsars inside it will help us understand how they originated or what caused the older pulsars to re-spin.