Astronomers have found “Apocalypse Pillars” in the constellation of Kiel 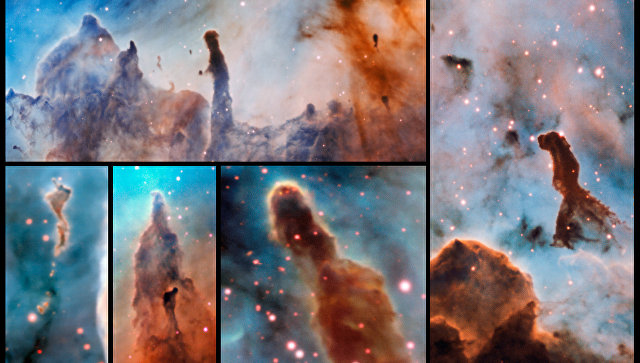 “Creation pillars”, despite the unusual and memorable shape, are quite ordinary gas-and-dust fog in which stars are created. They arose as a result already newly formed stars scattered and disseminated fog gas in those points where they are, having generated emptiness between “pillars” and “having illuminated” them unusually.

Anne McLeod from the European southern observatory in Garkhinge (Germany) and its colleagues who recently received three-dimensional pictures of “Creation Pillars”, the first in the history of astronomy, found in others “a star day nursery” an example of what expects this object through several million years – “Destruction Pillars” as their scientists for fun called.

They represent a gas-and-dust fog from which there was only a small part of “pillars” because stars in it were born slightly earlier, than shone in “Creation Pillars”, and their radiation already managed to disseminate the most part of gas and the dust surrounding newborn stars.

Opening of “Destruction Pillars” as Maklaud explains, is extremely important and interesting thing for astronomers as they, in a combination with pictures of “Creation Pillars” and several other similar objects, allowed scientists to understand for the first time what destroys these beautiful columns from gas and dust.

As showed observations which Maklaud and her colleagues conducted by means of the VLT telescope and the MUSE tool established on it, chief “grave-digger” of these space columns is process of so-called photoevaporation.

Astronomers usually understand process of ionization of molecules of neutral gases as the word the ultra-violet radiation of young stars and their “escape” from a fog in the open interstellar environment.

Solar wind or other types of emissions of stars, most likely, poorly influence education and destruction of the structures similar to “Creation Pillars” or “Apocalypse Pillars”. It is spoken well that rates of “weight loss” of these columns strictly depend on how many photons of the next stars reach them.

Studying of this process is extremely important for scientists for the reason that it, actually, manages how stars in the Galaxy are quickly created and as inventories of “star building materials” – neutral clouds of hydrogen and helium are quickly exhausted. These data, in turn, are important for assessment of how many stars were born in the Milky Way during its existence on some of which could arise or still intelligent life can arise.