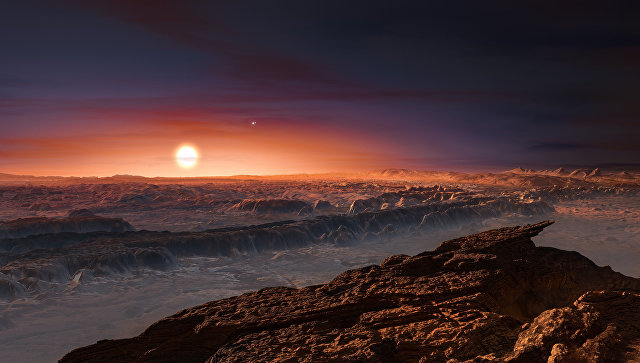 Recently discovered planet Proxima of b, the next to us Earth analog, most likely is covered with the liquid ocean, the French planetologists who have counted all its possible radiuses and structure of a subsoil, and published the conclusions in electronic library arXiv.org declare

“The proximity of the planet to a star isn’t a problem – despite the fact that it is possible to expect from such situation, the small distance to a star doesn’t mean that the surface of Proxima of b will be too hot for existence of water on her. On this planet there can be liquid oceans, and, respectively, some life forms” — Bastien Brugger and his colleagues from Marseille (France) university declare.

In August of this year astronomers from the European southern observatory have declared opening of the next to us of zemlepodobny and potentially manned planet – Proxima of the Centaur of b, it is more “double” of Earth weighing 1,2 times, than at our planet which is in “a life zone” at the red dwarf Proxima of the Centaur in 4 light years from Earth.

The planet rotates around this star on very close orbit – she 20 times closer to a star, than Earth to the Sun, and makes one revolution in only 12 incomplete days. For this reason of flash on a surface of Proxima, a star uneasy in character, will affect much stronger a condition of the atmosphere of the planet and its viability. Because of it many planetologists believe that the liquid ocean on Proxima of b can’t exist.

Bruges and its colleagues have come to a conclusion that actually it not and that the Proxima of b, most likely, is the planet ocean, having calculated all potentially possible sizes and physical properties of this planet which are keeping within data of observations.

Their calculations have shown that the radius of Proxima of b is in limits between 0,9 radiuses of Earth and 1,4 radiuses of our planet. In the first case she will be similar to Mercury – the most part of the planet will be the metal center, and her subsoil will be extremely dense. In that case about 0,05% of her weight – approximately as much how many there are waters at Earth can fall to the share of water.

If the Proxima of b is very big on the diameter then her subsoil has to be extremely leaky, and in that case it will be the planet ocean – about a half of her weight will fall on water, and the remained 50% — on a stone kernel. If this is so, then the Proxima is covered with the ocean of 200 kilometers in depth.

Both in that and in other case as show calculations of astronomers, the Proxima of b will be covered with rather thin atmosphere similar on terrestrial that, together with a high probability of availability of water on her, considerably increases our chances of detection of life on her.

On the other hand, scientists don’t deny that flashes and ultra-violet radiation of Proxima of the Centaur could evaporate the most part of oceans of planets that we won’t be able to check, high-quality spectral data on all system of Proxima won’t be obtained yet. The analysis of light of a star passing through the atmosphere of this planet will help us to understand what it consists of what density it has, and finally will give the exact answer whether there is on it water, conclude Bruges and its colleagues.