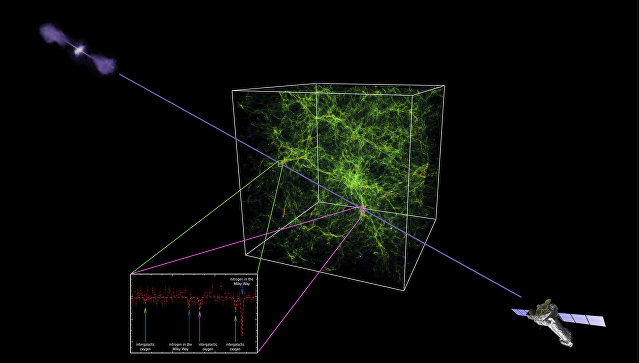 The XMM-Newton X-ray telescope has discovered giant gas and dust reserves in the “void” between the threads of the “cosmic web” of the universe, whose discovery explains the loss of about half of the matter of the universe, according to an article published in the journal Nature.

The discovery of Soviet physicists helped “Hubble” catch the “invisible” galaxy
“We have come very close to solving the main riddle of modern astrophysics, we know that this matter existed, since we see it in the early Universe, but today we can not find any of its tracks.” The question arises: where did it disappear? ” Fabrizio Nicastro (Fabrizio Nicastro) of the National Astrophysical Institute of Italy in Rome.

Holes in the web of the universe

It is believed that the universe is similar in structure to a giant three-dimensional web. Its threads are clusters of dark matter, so-called filaments. At the points of intersection of these filaments are dense clumps of visible matter – individual galaxies and groups of star metropolises.

The structure of this web is studied by scientists, observing thousands of distant galaxies with the help of terrestrial and orbital telescopes and fluctuations of the so-called relict radiation – the “echo” of the Big Bang, in which information on the distribution of dark matter over the universe was imprinted.

Scientists have found out where the most part of the “missing” matter of the Universe is hiding
These observations have relatively recently indicated an extremely unexpected thing – it turned out that the total mass of matter in the threads of this “web” and in the space between them is about half that predicted by theoretical calculations. There was a question – where this matter disappeared, on which scientists are still beating.

The search for this “universal loss”, as Nicastro explains, is significantly complicated by one convenient property of the universe – it is almost completely transparent to electromagnetic waves due to the fact that all the intergalactic gas reserves are in a fully ionized state.

For this reason, scientists can not count the number of atoms of hydrogen, helium and other elements in the void between the threads of the “web of the Universe” directly, since they hardly interact with light and other forms of radiation.

X-ray of the black hole

Nikastro and his colleagues solved this problem, trying to find not hydrogen or helium, but other heavier ions interacting more with soft X-ray beams and other types of waves that produce quasars, supermassive black holes in the centers of distant galaxies.

Oxygen, nitrogen, carbon and other heavy elements are extremely rare in the intergalactic environment: they did not exist during the Big Bang and could only get there from galaxies along with black hole and supernova emissions. Therefore, scientists had to spend a lot of time looking for a fairly bright and close to us quasar, whose x-ray would be strong enough to enable it to “highlight” the rarest atoms of heavy elements.

This role was approached by the galaxy 1ES 1553 + 113, located in the constellation Snake at a distance of seven billion light years from Earth. She, as Nicastro and his colleagues note, is far away from the known clusters of galaxies, which enabled them to use its light to estimate the number of heavy elements in the void between the threads of the “cosmic web.”

Watching it with the XMM-Newton orbiting telescope for two years, scientists have found traces of the existence of two giant gas clouds in an intergalactic medium filled with oxygen and ions of other heavy atoms.

Their mass, in turn, indicates that in such structures contains between 20% and 100% of all the “missing” matter of the universe. Now scientists are planning to conduct new measurements of this kind using other quasars that will help them narrow the gap in estimates and understand whether clouds of gas are on the way between Earth and 1ES 1553 + 113 unique objects, or to prove that they are found in all corners of the universe .