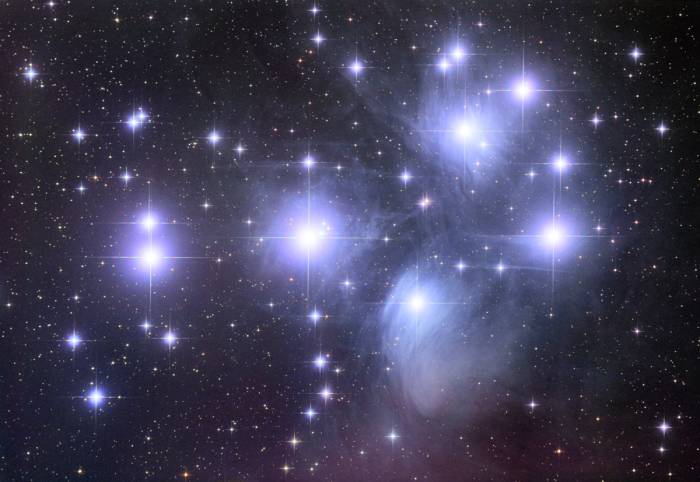 An international team of astronomers measured the rotation speed of the 750 stars that are part of a scattered cluster of the Pleiades. To do this, scientists using the space telescope “Kepler” observed the brightness variations of the stars caused by the presence of spots on their surface. The authors found that massive young stars rotate at a speed of about one revolution in 2-11 days, and their smaller “cousins” — less than a day. A study accepted for publication in the Astronomical Journal (Preprint in three parts: 1,2 and 3) briefly about it, reports NASA.

Scientists have monitored the cluster for 72 days. Through its main instrument, the photometer, “Kepler” recorded the changes in the brightness of thousands of stars of the Pleiades. As these stars, like the Sun, there are spots, the astronomers compared the brightness fluctuations with the appearance and disappearance of spots over the limb off. The age of the Pleiades (125 million years) suggests that the size of stellar spots on them much more than the Sun.

As a result of analysis the authors identified regularities linking the speed and mass of the stars. So, massive stars, with masses a little more or a little less sun usually had a rotational period of from two to 11 days. Less massive, with masses up to one-tenth solar, has completed its turnover in less than a day. For comparison, the speed of rotation of the Sun about 26 days for one revolution, at the age of 4.57 billion years. A total sample of 750 stars about 500 belonged to the category of small objects, inaccessible for observations from the Ground.

Such observations will help scientists to test existing models of the structure of stars. As the authors note, whether the star is fully convective or not, affects the speed of rotation of the outer shell as many other factors. The Pleiades is a relatively young cluster, its age has about 125 million years. Now astronomers are busy processing the same data on Nurseries, scattered star cluster in the constellation Cancer. Its age is six times greater than that of the Pleiades — 750 million years.

The observation of clusters was carried out in the framework of the mission K2 telescope “Kepler”. In 2013, the main mission of the unit came to an end, which is connected with the failure of the gyroscopes in retaining its position in space constant. If the first four years of the telescope was aimed at the same patch of sky near the Cygnus constellation, the astronomers now switch his attention between different objects.

On account of the “Kepler” over the thousands of open exoplanets, some of which was discovered and confirmed as part of the mission K2. The main instrument of the telescope is extremely sensitive photometer. This 95-megapixel CCD-matrix, is designed to track the slightest deviations in brightness of the stars.