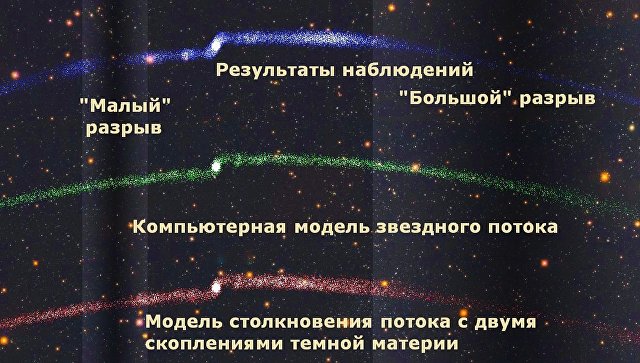 Russian-British astrophysicists have discovered two unusual gap in the star stream of Palomar 5, through which, they believe, passed small clusters of dark matter, according to a paper accepted for publication in the journal MNRAS.

We don’t know what constitutes dark matter, but we understand that it is everywhere. It permeates the entire Universe and plays the role of the framework, which brings together all astrophysical objects made of ordinary matter, including galaxies, ” says Denis was Erkal from the University of Cambridge (UK).

Have erkal and his colleagues Sergey Koposov and Vasily Belokurov made this discovery, which claims to be the most small of the known manifestations of dark matter in the visible Universe, by studying the so-called star streams. They represent a kind of tape of the stars, not related to each other by gravity, orbiting the center of the milky Way.

Stellar streams as today the astronomers believe, are the remnants of globular clusters or dwarf galaxies, once torn to pieces and absorbed the Milky Way in the distant past.

During these apocalyptic events, as found by astronomers five years ago, during the observation of the so-called ring of the unicorn, one of the most visible stellar streams of the milky Way steals almost all the dark matter have torn them galaxies. As a result, they fall apart and turn into those tapes that we can see in the night sky above the disk of the Galaxy.

Traces of this process as you think you have Erkal and his colleagues, they were able to detect in a stream of Palomar 5, studying the speed and direction of motion of stars within it, as well as their positions relative to each other and the milky Way using CFHT telescope in Hawaii.

Star flow – a very delicate structure, stars which do not feel each other. Such ribbon of stars can easily be disrupted if next to it will be a heavy object. For example, if a small cluster of dark matter will fly across the starry stream, it will encounter a hole, whose size would be proportional to the mass of the dark matter, explains Koposov.
The milky way tore a companion galaxy at four tail.

Two such holes astronomers have discovered in the tail of Palomar 5, which has been broken , as shown by their calculations, the bullets of dark matter, whose mass was only 10 million and 100 million times greater than that of the Sun.

As the scientists explain, this is a very small mass concentrations of dark matter that are orders of magnitude smaller than the mass of a typical halo– a kind of a donut or a ball of dark matter, which, as scientists believe today, surrounds all the galaxies and gives them the stars to scatter like stars in Palomar 5 and other star streams.

A small lot of these bullets, according to astrophysicists, says that dark matter particles, composing them, have much more mass than expected by the authors of the theories explaining the nature of dark matter. As believes have Erkal, there are smaller concentrations of dark matter that can be detected in a similar way.