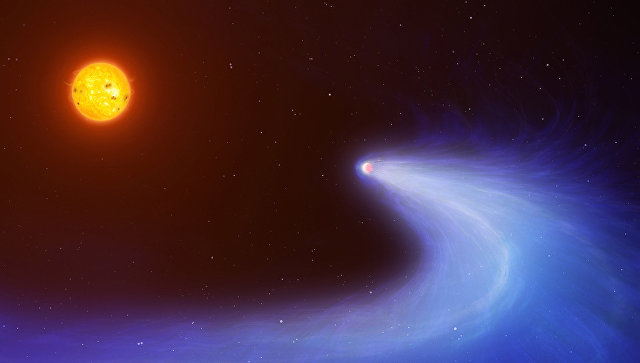 Many “hot Jupiters”, the most “infernal” planets of the Galaxy and the Universe, appear right at the vicinity of the luminary, and not only migrate there afterwards, as scientists previously thought. This conclusion was reached by planetologists who published an article in the electronic library arXiv.org

“Our calculations show that at least some of the” hot Jupiters “should have been formed in the same place as they are now, of course, this does not exclude the possibility of their migration in principle, but it says that such events, previously considered the norm, in fact, extremely rare, “writes Konstantin Batygin from the California Institute of Technology in Pasadena, USA.

“Hot Jupiters” astronomers call hot gas giants, which are only 2.2 to 75 million kilometers away from their stars. In the solar system, even Mercury approaches the star no closer than 46 million kilometers, and therefore in the atmospheres of such planets reign truly hellish temperatures – about 1000-1300 degrees Kelvin.

The discovery of the first “hot Jupiters,” as Batygin and his colleague Elizabeth Baily noted, was a big surprise for scientists who began to argue about how and where such planets emerge.

“For a long time the solar system was for us the only example of how the planetary system looks and how it can be formed, for example, we have long believed, based on the masses of Mercury and other inner worlds, that large planets can not form in the immediate neighborhood of the stars. “Hot Jupiters” did not fit into this picture, “the planetologist continues.

Today, many planetologists believe that this “anomaly” can be explained with the help of the same mechanism that describes the birth of the giant planets of the solar system. “Hot Jupiters”, like their cold namesake, were to be born in the cold part of the protoplanetary disk and later migrate towards the star as a result of gravitational interactions with other “embryos” of the planets.

Recent observations of emerging stars and protoplanetary disks, contrary to this idea, led Bailey to formulate an alternative theory in which “hot Jupiters” can be formed directly next to the star.

Their “embryos,” as the planetologist notes, are tens and hundreds of “super-earths” – large stony objects, whose mass exceeds the terrestrial, appearing inside the primary nebula in the first moments of life of the luminary. Almost all of them will later be thrown out of the star system, but some will have enough mass to quickly collect all the surrounding gas and dust and turn into a gas giant.

As Batygin and Bailey found out, the planets that have arisen in this way will have several distinctive features that allow them to be separated from the “hot Jupiters” of migrants. In particular, their mass will be associated in a special way with the point of the orbit at which they are located. In addition, many of them should revolve around the star not alone, but in the company of one or more “super-earth”.

Similar features, according to planetologists, have a significant part of the already discovered “hot Jupiters”, which indicates that they were not born on the outskirts of protoplanetary discs, but directly next to the luminary. This, in turn, indicates that not all planetary families appear in the same way as the solar system, which will complicate the assessment of their habitability and the search for extraterrestrial life.