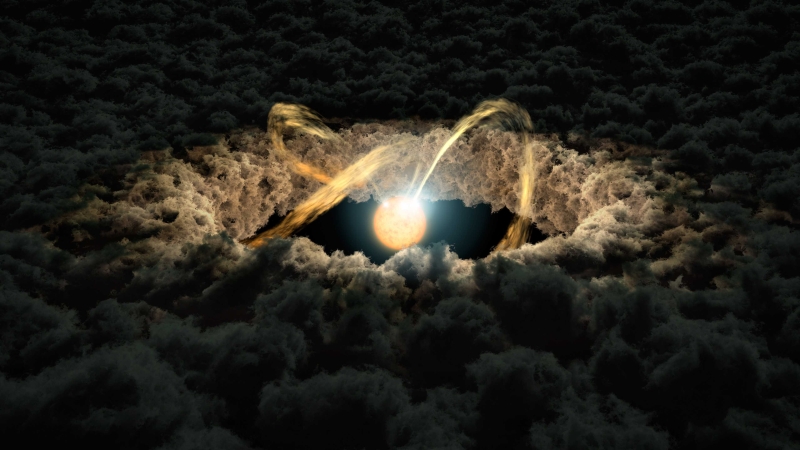 Long shadows moving along the outer regions of the protoplanetary disk of the star HD 135344B are connected with the processes of the birth of new planets in the interior regions.

The international group of astronomers was able to consider the details of the structure of the protoplanetary disk of gas and dust around the star HD 135344B. They managed to see spiral arms and moving shadows, which so far could not be explained. This is reported by an article accepted for publication in the Astrophysical Journal and presented in the public domain in the library of preprints arXiv.org.

Earlier, Tomas Stolker (Tomas Stolker) from the University of Amsterdam and his colleagues have already managed to make a fairly clear picture of the neighborhood of the star HD135344B. They used a new coronary system with adaptive optics SPHERE, installed in the European observatory VLT, which is located in Chile. This allowed in the end to obtain a series of images of what is happening in 450 light years in a gas-dust disk, where the process of birth of the planetary system is in progress.

The adaptive optics of the SPHERE tool helped to eliminate the distortions introduced into the picture by the earth’s atmosphere. The coronagraph and polarization filters allowed to block the light of the star itself, invisible on the images / © Tomas Stolker, University of Amsterdam

Researchers managed to see pronounced spiral arms, probably formed under the influence of one or several rather large protoplanets, which in the future will turn into gas giants, similar to Jupiter or Saturn. There are also fluctuations in the brightness of the outer regions of the gas-dust disk, caused, apparently, by shadows from some objects or processes in internal, rapidly rotating regions. According to scientists, most likely, they are thrown out by dense clusters of vortices or accumulations of solid particles.


“Two years ago we suspected that the shadows on the external disk are caused by some processes in the internal areas,” says Thomas Stalker. “Unfortunately, we can not see them directly, even with SPHERE.”