Astronomers have opened a black hole 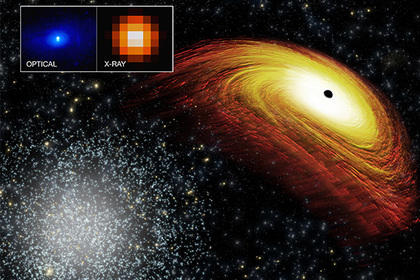 Astrophysicists from the United States, Chile, France and Japan opened a candidate for a receding supermassive black hole. The corresponding study was accepted for publication in The Astrophysical Journal, available at arXiv.org, briefly reported to NASA.

Object CXO J101527.2 + 625911 is 160 million times heavier than the Sun and is located at a distance of 3.9 billion light years from Earth. The object differs from most supermassive black holes that it is not located in the center of an elliptical galaxy, but gradually moves away from it.

At NASA’s X-ray image in the center of the galaxy, a noticeably bright glow (there is an intense star formation), near it – an even brighter CXO J101527.2 + 625911. Scientists believe that a less bright glow can be associated with a second supermassive black hole.

CXO J101527.2 + 625911 was studied with the help of the space X-ray telescope Chandra and, in the optical range, by ground-based observatories.

A black hole is an object that can not leave (in classical physics) the body that has entered into it. The supermassive black hole, unlike the others, is at least a hundred thousand times heavier than the Sun. As a rule, in most active centers of large galaxies such objects are located. They, in the opinion of scientists, have a decisive influence on the evolution of large stellar systems. In particular, in the centers of the Milky Way and the Andromeda Nebula there are supermassive black holes, which, according to researchers, will merge into one in about four billion years.