Astronomers have opened the “hot Jupiter” rotating around a far star 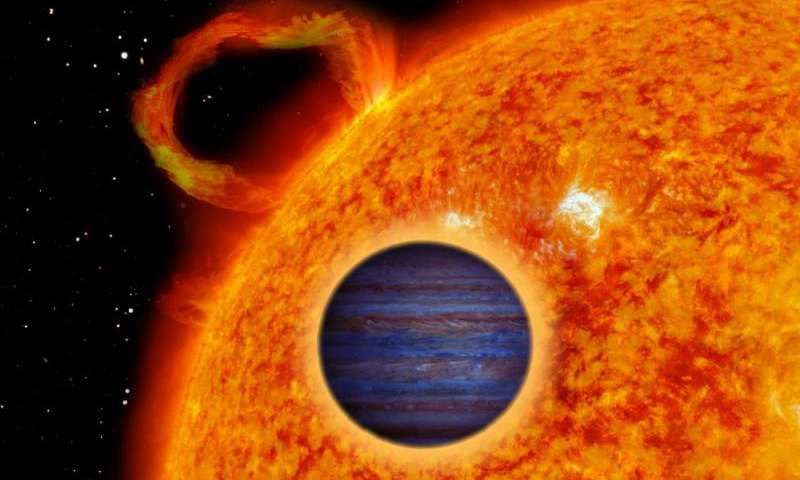 Astronomers have opened the exoplanet of a class of a so-called hot floodlight making transit before the far sunlike star which is at distance about 1800 light years from Earth. This newly opened planet which has received the designation EPIC 220504338b has been found by means of an expanded mission of the space telescope of NASA of Kepler under the name K2.

The planet of EPIC 220504338b has been for the first time noticed at the observations within K2 mission made in the middle of 2016. For confirmation of the planetary status of this object team of researchers led by Nestor Espinoza (Nestor Espinoza) from Catholic university Chile has made additional observations by means of the tool Fibre-fed, Extended Range, Échelle Spectrograph (FEROS) which is in La-Silia’s, Chile observatory.

The recent spectroscopic observations made by means of the FEROS tool have allowed the command to confirm that EPIC 220504338b represents the dense “hot floodlight” making transit before a sunlike star and also to calculate key parameters of this planet and its parental star.

According to results of this research the planet of EPIC 220504338b has for 10 percent the smaller sizes, in comparison with Jupiter, and for 30 percent less massive, than the krunpeyshy planet of Solar system. This exoplanet handles around a star age about 6 billion years the orbital period of 5,8 days. Density of substance of the planet makes about 2,1 g/cm3 at a temperature of surface of 1160 K that does it to one of the most dense hot floodlights weighing less than two masses of Jupiter known for the scientist.

Also researchers have determined key parameters of a star of EPIC 220504338, namely weight, and radius. The mass of a star has appeared to approximately equal mass of the Sun, and radius has made about 1,05 radiuses of the Sun.