Astronomers have recorded mysterious outbreaks at the south pole of Jupiter 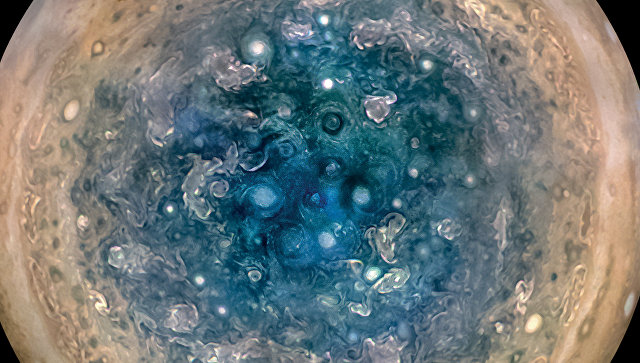 Scientists for the first time recorded the birth of mysterious X-ray flares at the southern pole of Jupiter, whose birth is still controlled by unknown processes in the magnetosphere of the giant planet, according to an article published in the journal Nature Astronomy.

“We did not think that the” hot spots “would flare up at the poles of Jupiter independently of each other, since we assumed that their birth is controlled by some common processes in the magnetic field of the planet.Only longer observations and data from Juno will help us understand , what exactly generates these X-ray auroras, “- said William Dunn (William Dunn) from the University College of London (UK).

Auroras occur when charged solar wind particles emitted by the Sun collide with the magnetic field of planets and begin to move along lines of force. In the region of the magnetic poles, the particles enter the atmosphere and cause it to glow, which is called polar aurora. The polar luminosity of Jupiter, as the observations of recent years have shown, is not connected with the solar wind, and scientists have been guessing the disclosure of their riddle for a long time.

Dunn and his colleagues a year ago suggested, observing Jupiter with the help of the Chandra telescope, that X-ray auroras can arise as a result of a collision of the coronal emissions of the Sun and the magnetic shield of the planet and the release of a huge amount of energy during such “space accidents”. Their findings, they planned to check using the European orbiting telescope XMM Newton.

During these observations, Dann’s team made an unexpected discovery that made them doubt their initial conclusions and made the X-ray auroras of Jupiter even more mysterious than they were before the observations on the Chandra.

The fact is that Dunn and his colleagues managed to find traces of X-ray auroras on the south pole of the giant planet, where scientists had never seen such flares before and believed that they should not occur there.

When scientists thoroughly studied their properties, they found that these x-ray bursts were not born at all when their analogs appeared at the north pole, and had a completely different brightness and other physical characteristics.

This behavior of the “southern” outbreaks did not fully correspond to last year’s theory of Dunn, postulating that they should be generated by the same processes and occur simultaneously.

It is not yet clear what exactly causes these differences and how X-ray flashes on the south pole of Jupiter, but scientists hope that all these puzzles can uncover the Juno probe, periodically approaching the planet and flying over its poles. On board the Juno, unfortunately, there are no X-ray sensors, but its other instruments can observe changes in the properties of the planet’s magnetic field and the motion of ions in its atmosphere.

These observations, as Dunn hopes, will help us understand what exactly causes sulfur and oxygen ions generating polar auroras to move toward the poles of Jupiter and to get there not simultaneously, but at different periods of time.

Such shifts, according to the current assumptions of scientists, can cause both peculiarities in the structure of the interplanetary magnetic field that interfere with the motion of particles in one direction, and special instability zones arising due to different velocities of the plasma movement of solar emissions and the upper layers of the atmosphere of Jupiter.

Further observations of outbreaks, the scientist hopes, will help us to understand which of these options is closer to the truth and come closer to unraveling the mystery of the birth of X-ray flares on Jupiter and other giant planets, dozens of which were recently discovered outside the solar system.