Astronomers have seen the megalisation of galaxies 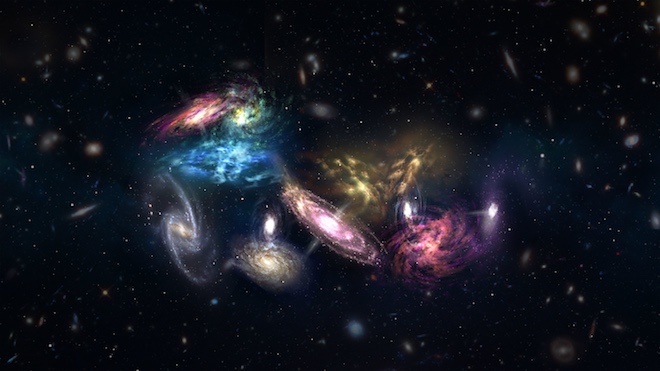 Using the ALMA radio telescope complex in Chile, an international team of scientists discovered a dense cluster of 14 galaxies at a distance of 12.4 billion light years, which was formed shortly after the Big Bang.

This galactic protocluster, designated SPT2349-56, was first observed in 2010 with the help of the Southern Polar Telescope, which showed only a dull spot. Subsequent observations using more powerful telescopes allowed astronomers to distinguish 14 separate objects, concentrated on a surprisingly small area of ​​space, which indicated a protocluster at the earliest stage of development.

The discovery of this cluster gives astronomers an unprecedented opportunity to study the first stages of clusters formation less than 1.5 billion years after the Big Bang. Using ALMA data as a starting point for complex computer modeling, researchers were able to demonstrate how this galactic object will grow and develop.

During the first few million years of space history, ordinary and dark matter began to unite, leading to the appearance of galactic clusters. Currently, these clusters can contain up to a thousand galaxies, a huge amount of dark matter, giant black holes and gas clouds with a temperature of over one million degrees.

According to modern theories, such massive clusters as SPT2349-56 require twice as much time to evolve. “It’s a mystery to us how this cluster turned out to be so great if it was to develop gradually over billions of years. This discovery provides an incredible opportunity to explore how galaxies gathered together under these extreme conditions, “said Tim Miller of Yale University.

“For the first time, we have a clear starting point for understanding the evolution of the galaxy cluster. Over time, the 14 observed galaxies will stop forming stars and begin to merge into one giant galaxy – perhaps the most massive known object in the universe, “said astrophysicist Scott Chapman from Dalhousie University in Canada.