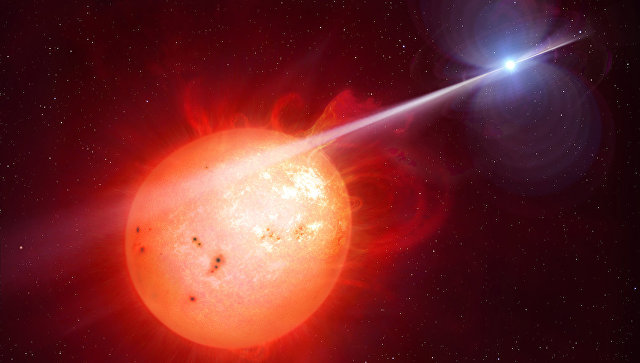 AR unusual star in the constellation of the Scorpion was “a battleground” between the two halves of the system – the red and the white dwarf that periodically “fires” his partner flashes of radio emission, which causes a bright flash on the surface of the second light, according to a paper published in Nature.

AR Scorpion was opened over 40 years ago, but no one suspected the true nature of this star until last may, when we studied with a high-speed camera ULTRACAM and the telescope William Herschel. We realized that we see something extraordinary in the first minute we saw her,” says Tom Marsh Tom Marsh from the University of Warwick (UK).

Marsh and his colleagues discovered until the unusual star system “halves” which is supported by a very hostile relationship. Previously regarded as an ordinary “variable star” AR Scorpion is actually flashing, like a lighthouse, flashing in all ranges of electromagnetic radiation and presumably changing the speed of the movement every two minutes.

As shown by further observations, in fact, the AR Scorpion consists of two very unusual star – a white dwarf mass of 0.3 solar, and a red dwarf with a mass of 0.81 in the Sun. The white dwarf rotates at a very close orbit around a larger second star, making one revolution for less than four hours, occasionally obscuring it. This was the reason for the insertion of this pair of stars among the variables of light in the 70’s of last century. What is most interesting, this interaction does not end there.

White dwarf, according to Marsh, has an unusually high rotation rate around its axis and a powerful magnetic field thanks to which he periodically emits beams of radio waves and charged particles from their poles. The axis of rotation of the star, by happy for us, coincidence is sometimes directed towards “big brother”.

As a result, every two minutes – the time of one revolution around its axis – red dwarf for a moment falls under the “bombardment” of the white dwarf, participating in a kind of “star wars.”

This radiation is absorbed by electrons in the atmosphere of a red dwarf, which then emit this energy in the form of light, heat, radio waves and other forms of electromagnetic radiation, with the result that the brightness AR of the Scorpion grows to impossibly high values for stars of similar mass of about 4.4% of the brightness of the Sun – in excess of permitted levels approximately an order of magnitude.

According to astronomers, this behavior of double stars and the phenomenon of electron acceleration in the atmosphere of one of its halves is really unique – we still don’t know any other pair of stars, which would have been something similar. Moreover, scientists still are not sure, where do these electrons, and why the power of the radiation is ten times higher than the predicted values.

Like “star wars,” the authors of the article will last long in the cosmic sense – about 10 million years, the speed of rotation of the white dwarf will decrease to such an extent that he will not be able to produce flashes of radio waves and charged particles. On the other hand, as in the fictional “Star Wars”, it can always start a new episode – the absorption of matter of the second star, or “be eaten” small planet again “hyping” white dwarf and force him to continue the “bombing”.