Astronomers have solved the mystery of the birth of Mordor Charon 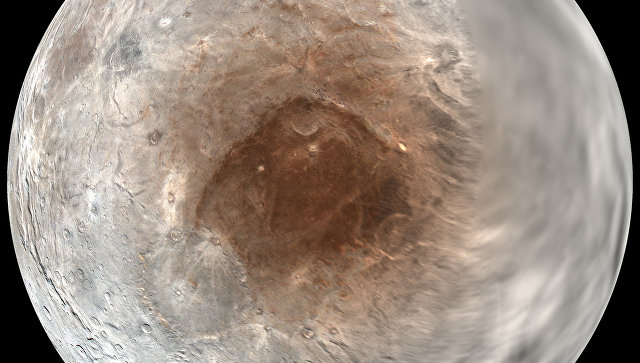 Dark cap at the North pole of Charon, which astronomers dubbed Mordor, was due to ultra-low temperatures, occasionally prevailing on the surface of Pluto due to its unusual motion in its orbit, according to a paper published in the journal Nature.

When the New Horizons probe began to move closer to Pluto and its retinue in June 2015, the first pictures of the planet and its moons revealed a very unusual ice world, many of the features which the scientists were at a loss to explain.

A striking example of this was the so-called Mordor at the North pole of Charon, the largest satellite of Pluto, which the science team, New Horizons saw both the famous heart of the dwarf planet, plains Satellite. Mordor is a dark red rocky region, covered as it was then felt by scientists, the traces of Pluto’s atmosphere.

William Grundy (William Grundy of Lowell Observatory in Flagstaff (USA) and his colleagues in the science team, New Horizons confirmed that Mordor was born as a result of such exchange of matter between the two planets, and due to the unusual movement of Charon in orbit, examining the data that the probe had recently transferred to the Ground.

As the scientists explain, the dark red color of Mordor due to the fact that it is covered with a kind of snow-unsaturated hydrocarbons-Tulinov, resulting from the decomposition of molecules of methane and ethane under the action of the rays of the Sun. Source of this snow can only be Pluto, since its formation the desired atmosphere and large reserves of hydrocarbons that are missing on Charon.

This snow survives on the surface of Charon and accumulates at its pole due to the fact that the disk of Pluto periodically closes Mordor and other parts of the Northern hemisphere of the planet from Sun light, dramatically lowering the temperature of its surface. Such periods of eternal darkness, according to the scientists, can last up to 150 years, during which the temperature of the surface of Charon drops 20-40 degrees Kelvin. This behavior space of Mordor unites him with his Tolkienesque namesake, the country where stretched darkness.

In these times the temperature in Mordor drops to the magical mark of 25 Kelvin (minus 248 degrees Celsius), the transition of which is methane, tolin and other hydrocarbons are converted to ice and snow. Due to this organic matter escaping from the atmosphere of Pluto, gradually accumulate at the North pole of Charon, where the molecules of methane can continue to turn in tolin under the influence of galactic rays, solar wind and ultraviolet radiation.

When Charon is Pluto ceases to obscure from him the Sun, the temperature rises sharply, and the methane and other lighter substances evaporate into space, while heavier tolin remain in place, forming a new layer of red snow.

The accumulation of this snow is going very slowly, at a rate of 3 nanometers per year, which means that the current dark hat Charon were formed at least several million years. For a billion years a layer of tolinou in Mordor reached a thickness of just 30 centimeters. This allows us to consider the growth of Mordor on the Charon one of the slowest geological processes in the Solar system.