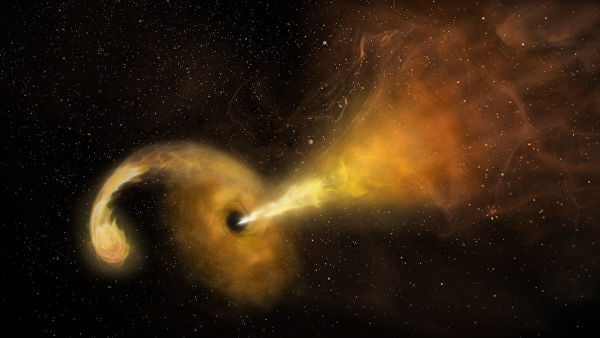 Observations on one of the rogue stars that left the Milky Way several million years ago, unexpectedly showed that she was not born in the center of the Galaxy, but in one of her spiral arms. It was considered impossible before, scientists write in the Astrophysical Journal.

“This discovery radically changes our understanding of how such stars arise. The fact that its trajectory begins inside the disk of the Milky Way, and not in its core, suggests that the conditions necessary for acceleration and“ ejection ”of such stars, are present not only in the vicinity of supermassive black holes “, – says Monica Valluri (Monica Valluri) from the University of Michigan in Ann Arbor (USA).

The overwhelming majority of the stars rotates around the center of our galaxy, moving at a speed not exceeding two hundred kilometers per second. Since the mid-2000s, astronomers discovered two dozen of the so-called hyper-velocity stars, which move so fast that they “got rid of” the pull of the Milky Way and actually left it.

What made them become cosmic “outcasts”? Scientists believe that the stars are accelerated to such speeds due to gravitational interaction with a supermassive black hole in the center of the Galaxy or as a result of supernova explosions in close binary systems located near this giant object.

Other ways of their formation were considered unlikely, since our galaxy is too large in size and attractive for the stars to accelerate to ultra-high speed just by a supernova explosion. On the other hand, in recent years, several unusual hyperspeed stars have been discovered, moving obviously not from the center of the Galaxy and “breaking” such a rule.

Valluri and her colleagues discovered another light that does not fit into this theory by analyzing data collected by the GAIA star probe while observing one of the hyper-velocity stars, the blue giant LAMOST-HVS1, found in the constellation of Cancer four years ago.

This luminary, as scientists then found out, turned out to be the largest “outcast” star, whose mass was almost nine times as high as the sun. She managed to move away from the Milky Way to a sufficiently long distance, which made it difficult to restore the trajectory of her “escape” and prevented scientists from understanding what had ejected her from the Galaxy.

The GAIA space observatory helped scientists measure the exact speed of movement of this star and calculate its current and past coordinates. Comparing these data, they calculated the trajectory of LAMOST-HVS1 and were surprised to find that the “homeland” of this star is not in the center of the Milky Way, but in one of its small spiral arms.

If this is true, then this star left the middle regions of the Galaxy about 33 million years ago, moving at a speed of 568 kilometers per second. Given this value and the mass of LAMOST-HVS1, as well as the absence of large star clusters in this arm, no theory has yet been able to explain the current position and origin of this star.

As astronomers suggest, the black hole of the so-called intermediate mass, whose astronomers have been searching for traces in the Milky Way and other galaxies for several decades, could disperse it. If the conclusions of Valluri and her colleagues are confirmed, then LAMOST-HVS1 can be the first proof that these objects really exist in the Universe.