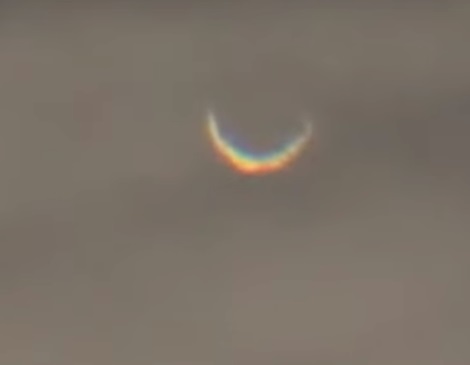 Like the Moon, Venus has phases, and it is now a crescent moon. Moreover, it is a rainbow crescent. Meiying Lee photographed this phenomenon from Hsinchu, Taiwan.

“I videotaped a tiny crescent dipping into the clouds at sunset,” says Lee. “The colors of the rainbow were pretty distinct.”

Earth’s atmosphere acts like a prism, splitting Venus’ light into its primary colors. Tiny red Venus, blue Venus and green Venus move across the sky in tandem — a celestial rainbow.

“There was a narrow interval just after sunset when Venus was visible and the sun was safely behind the mountains south of Tucson,” Herman says. “That’s when I took this picture.”

Soon the sun and Venus will be too close together for a sunset photo. On Saturday, Jan. 8, Venus will pass almost directly between the Earth and the Sun — an event astronomers call “incomplete conjunction.” At this time, the separation will be no more than 5 degrees, and Venus will be surrounded by daytime blue.

Anthony J. Cook, recently retired from Griffith Observatory, gives the following advice for observing Venus during daylight hours: “Find a tall building that will shade your telescope at noon. This will make it relatively easy and safe to find and observe Venus from the northern hemisphere. Just make sure your telescope is completely in the shade of the building, and observe for 15 minutes after local noon.”