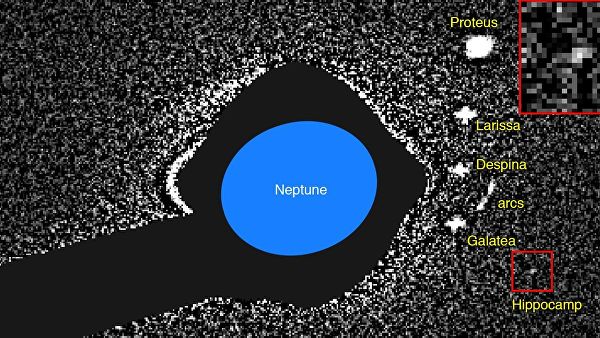 Images from Hubble helped planetary scientists to find another moon in Neptune, traces of which scientists discovered by chance five years ago. Her description and possible mechanisms of formation were presented in the journal Nature.

“Our observations show that Hippocampus most likely broke away from Proteus in the distant past. This once again confirms that the inner moons of Neptune acquired their current appearance after many collisions in past eras,” says Mark Showalter from the Institute for Extraterrestrial Intelligence SETI (USA).

Neptune, the last “real” planet of the Solar System, was discovered in September 1846 by the German astronomer Johann Halle after it was predicted by theorists who discovered the oddities in the orbit location of its “neighbor” Uran.

Before the Neptune area was visited by the Voyager-2 interplanetary station, scientists believed that he had only three satellites – Triton, discovered together with the planet itself, as well as Larissa and Nereid, discovered in the second half of the 20th century.

In September 1989, the world learned about the existence of five more satellites of the “king of the seas”, opened with cameras and other Voyager-2 tools. All of them were even closer to Neptune than Triton, and had an extremely small size and mass. Already in the current millennium, astronomers discovered five more moons using new ground-based telescopes, bringing their total number to thirteen.

Showalter and his colleagues added another object to the satellite of Neptune, studying the photos of the gas giant, which periodically received the Hubble in the first decade of the current century.

Five years ago, as the astronomer notes, he used these images to test the algorithm to search for particularly distant and dim dwarf planets in the Kuiper belt, where the New Horizons probe was heading at the time.

It is based on one simple principle — moons and planets move in orbit in a predictable way, smoothly moving from one point to another, while background objects, such as stars, do not change their position. This allows you to overlay each other many similar images of the same point in space, taken at different times, and artificially increase the sensitivity of the telescope that made them, sacrificing clarity of the picture.

Checking the work of this algorithm on the well-studied system of Neptune, Showalter and his team made an unexpected discovery. They found an extremely small and previously unknown moon of the giant planet, located between Proteus and Larissa. In size, it was approximately equal to Phobos or Deimos, the satellites of Mars, and made a turn around Neptune in just one part-time.

After reporting this discovery to the press, scientists assigned the temporary name S / 2004 N 1 to their find and began to work on its confirmation. To do this, they conducted several repetitive series of observations using the Hubble in 2016, using images in the ultraviolet and in the visible range of electromagnetic waves.

In total, they were able to “catch” S / 2004 N 1 about two dozen times, which confirmed its existence and allowed scientists to assign this moon a new name – Hippocampus, and to clarify its orbit, mass and some other characteristics.

For example, the space seahorse was about five million times lighter than Triton and ten times smaller than its nearest neighbors. In addition, its diameter was slightly less than expected – about 17 kilometers, and the orbit, as Showalter and his team discovered, was removed from its nearest neighbor, Proteus, by only 12 thousand kilometers.

This fact, as the researcher notes, reveals the history of the formation of the Hippocampus. Proteus is about four thousand times larger in volume, and on its surface there is a large crater, Pharos, where the new moon of Neptune can easily fit in entirely.

Both of them, according to astronomers, indicate that the Hippocampus is a fragment of Proteus, “knocked out” from its surface by a comet or a large asteroid in the first epochs of the life of the solar system. Moreover, scientists suspect that their discovery itself several times collided with other objects, disintegrated into parts and re-united into a single whole.

This scenario, according to researchers, well explains why the inner moons of Neptune have very “unstable” orbits, so different sizes and other unusual characteristics.