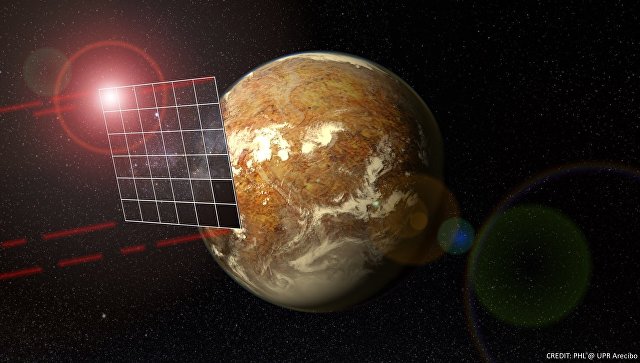 German astronomers talked about the possibility to fly to alpha Centauri, our nearest star is just over 140 years and back in about the same time with a giant light sail area of two pyramids of Cheops.

“This sail can be made from graphene – an extremely thin, lightweight and very durable film of carbon. It has yet to produce and cover the reflective material, but many great achievements in history were made possible due to the fact that we have overcome insurmountable obstacles. Soon we may enter an era when humanity will leave their star system and will begin to study exoplanets by using such probes,” said Rene Heller (rené Heller) from the Institute for the study of the solar system in göttingen (Germany).

In April 2016, the renowned British cosmologist Stephen Hawking and Russian billionaire Yuri Milner spoke about his next space initiative is a series of projects Breakthrough Initiatives Breakthrough Starshot. The oligarch has allocated 100 million dollars to build a spacecraft based on the ideas of California physicists under the leadership of Philip Lubina (Philip Lubin) last year.

Its essence lies in the fact, to send to distant planets is not a classic spaceships, and extremely light and flat structure of the retro-reflective material, which will accelerate to near-light speeds with a powerful orbital laser.

To alpha Centauri in 20 years, Hawking and Milner on the intergalactic probe
Such an interstellar sailing ship, according to the calculations of American physicists will be able to reach alpha Centauri in 20 years, and will fly between Mars and Earth in just three days without payload and for a month under a load of 10 tons. The main issue in that and in other case it will be the inhibition of probe – invented his team no idea how to stop laser sailboat safe.

For this reason, the project participants Breakthrough Starshot plan to carry out this mission, just as it took the convergence of the New Horizons probe to Pluto: stellar fleet of tiny sailboats running with the help of lasers, just fly past alpha Centauri and try to send back her pictures.
German alternative

Two famous German astronomer, Heller and Michael Hippke (Michael Hippke), offer an alternative option to travel to alpha Centauri, which will be delayed for a longer period, but will allow you to send 10 times more cargo to reach orbit of this triple stellar system and, if desired, back to Earth.

The key to this task is a gigantic solar sail with an area of about 100 thousand square meters, made of ultra-light material, graphene, fibers of the nanotubes or other flat substances. According to calculations Hippke and Heller, such a structure, equivalent in size to the two pyramids of Cheops, or a dozen football stadiums, will be able to disperse microprobe mass of 10 grams up to speed in about 20% of the speed of light.

Such a sail will be able to reach alpha Centauri in about 90 years, having become acquainted with alpha Centauri A, the largest star system to a distance of approximately 4.4 million kilometers. At this moment, as the scientists explain, the probe must reset the speed to 4.6% of the speed of light, otherwise it will fly past the stars and will not be able to use gravity and light to slow their movement and turning towards the two other inhabitants of the system.

How to carry out such braking? To do this, simply rotate the solar sail so that it is pressed the light is not the Sun, and alpha Centauri. Once the maneuver is complete, the scientists plan to deploy the sail and to use the light of alpha Centauri To travel to Proxima b, planets at Proxima Centauri. This process, according to scientists, is approximately 46 years old, and 140 years after launch from Earth probe to orbit the planet.
The main question of the cosmos

Why is all this necessary, given the very long time trip sailing? As noted by Hippke really like the timing of the mission are not particularly long and unusual for the earth’s space exploration – for example, the probes Voyager spent in space is only two times smaller than the period of this expedition to alpha Centauri.

According to him, unlike Breakthrough Starshot, like 10g the probes will contain a lot more scientific instruments, and they will have a much higher chance of success than a swarm of nanoprobes that are run by using lasers. Therefore, the German scientists suggest to consider his project as a fallback or Supplement to the mission of the Hawking and Milner, if that fails, or Vice versa, will yield extremely interesting results.

Today Hippke and Heller, according to the University of Puerto Rico in Arecibo, negotiate with representatives of Breakthrough Starshot about possible integration of their project into long-term plans of the Milner Foundation. As an alternative, they offer to expedite the nanoprobes Breakthrough Starshot with the help of the Sun, releasing them into space at a small distance from the sun, not through expensive and potentially harmful to the probes phased array laser.