Astronomers revealed a galaxy secret in the constellation of Cassiopeia 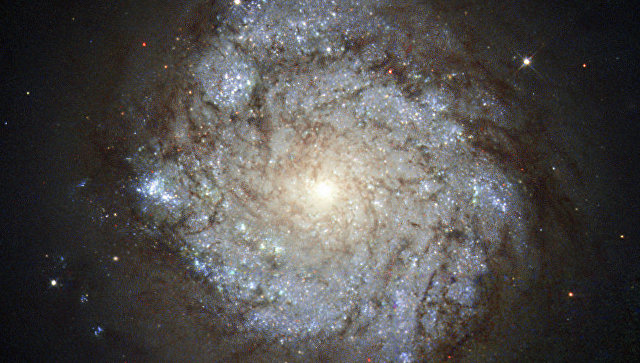 Pictures from Hubble helped scientists to open one of the mysteries of the constellation of Cassiopeia – why suburbs of spiral sleeves of a galaxy of NGC 278 where the rough flash of star formation is now observed, remain “dead”, the website of the space telescope reports.

The galaxy of NGC 278 was opened in 1786 by the famous British astronomer William Gershel who initially counted it as a large spherical congestion of stars on suburbs of the Milky Way. To galactic measures it “the family of stars” is removed from us on rather small distance – in 40 million light years.

Thanks to it and thanks to the fact that we look at this galaxy “from above” we can enjoy a type of its beautiful spiral sleeves and a bright core. Bluish color of the interior of these sleeves gives that in NGC 278 there are rough processes of star formation.

The first detailed pictures of suburbs of this galaxy received by Hubble in 1990 put an interesting riddle before scientists – it turned out that new stars are born only in the interior of the sleeves remote from the center no more than on 10 thousand light years. Suburbs for some reason remained dark, and new stars did not arise there.

The new photos of NGC 278 received by means of the WFPC2 camera helped astronomers to reveal this “Cassiopeia secret” – these photos demonstrate that NGC 278 endured collision with the small galaxy which had large reserves of indifferent gas.

This space road accident “shook up” gas in the central part of NGC 278 and forced it to enter rough reactions of star formation. Dust of the died dwarf galaxy was thrown out on suburbs of sleeves of NGC 278 that made them more dark, than they were before this collision. It also generated that mysterious contrast in shape of sleeves which surprised scientists in previous years.

What is interesting, astronomers note that similar flashes of star formation seldom happen in galaxies which, as NGC 278, do not possess a so-called crossing point – the dense oblong congestion of stars in the center of their kernels. The similar behavior does NGC 278 by really unique object which will draw further an attention of astrophysicists.