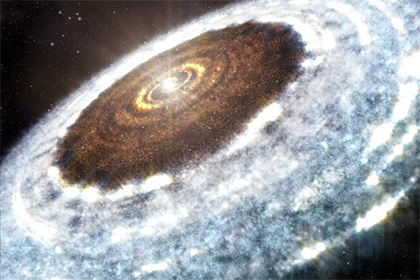 Astrophysics European southern Observatory for the first time observed the snow line in orbit around a young star. The area where the water in the vapor state, enters the ice, removed from the mother star at a record distance of 40 astronomical units. The scientific article with the results of a study published in the journal Nature.

Young stars are often surrounded by a dense spinning cloud of gas and dust, known as protoplanetary disks from which planets are born later. The heat coming from solar-type stars, contributes to the fact that all the water within three astronomical units, or 450 million kilometers is in the gaseous state. At a greater distance low pressure causes the vapor to turn into ice. This transition area is called the snow line.

However, the star V883 Orion snow line is located much further to 40 astronomical units (six billion kilometers), which is comparable with the radius of the orbit of Pluto. This happened due to the fact that V883 Orion increased its brightness due to the collision of a large number of protoplanetary disk material with the stellar surface. This has allowed astronomers using Atkarskoy a large antenna array (ALMA) to detect the snow line while searching for signs of disk fragmentation, which leads to the appearance of the planets.

The presence of water ice regulates the efficiency of coagulation of dust particles is the initial stage of the formation of large cosmic bodies. In the area where the snow evaporates, the stone formed a small planet. Outside of the ice contributes to the rapid formation of “snowballs”, which ultimately turn into gas giants like Jupiter. Scientists believe that such outbreaks as the one that occurred with V883 Orion, is a common phenomenon in the evolution of most planetary systems.