Astronomers saw the echo of star eaten by black hole 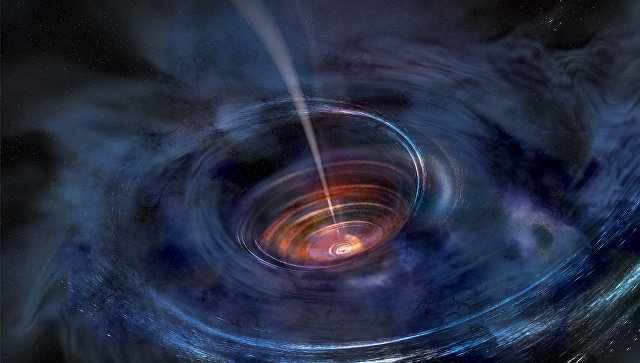 Astrophysics first saw the light echo, like a black hole tearing near her stars and absorb their remains. The study of this phenomenon will help to understand how much dust surrounds the darkest objects in the Universe, according to a paper published in the Astrophysical Journal.

We were the first to see heat echoes several events of this kind. We found that the black hole has consumed and destroyed all that is between it and a surrounding spherical shell of dust. Figuratively speaking, she cleaned her room, burning everything around with a flame thrower, said Short van velzen from Johns Hopkins University in Baltimore (USA).

It is believed that at the heart of most galaxies there is at least one supermassive black hole. The reasons for the formation of these objects is still not entirely clear. Observing the curvature of space around them suggests that the typical mass of supermassive black holes is in the range of one million to several billion solar masses.

Van velzen and colleagues have several years of watching the supermassive black holes in distant galaxies tear apart and eat them near to the stars, trying to understand their dying light to the Creek that surrounds such black holes and how they destroy the star.

Last year van Velsen and his colleagues were the first to show that a similar gap star not only leads to flares in x-ray and optical bands, but also in radiobeta. This discovery has brought them to the idea that in the vicinity of a black hole there is something that absorbs x-rays and ultraviolet and pereslushal them in the form of radio waves.

Following this idea, van velzen and his colleagues decided to see what else may occur at the time of the devouring of stars by the black hole, having studied archival images from the WISE infrared telescope, watching the centers of several thousand galaxies during the cold phase of its work.

The idea of the authors was the assumption that a black hole may surround a kind of ring or sphere of dust removed from it by a few trillion kilometers. It absorbs x-rays and ultraviolet light and then slowly emits them for several months or even years in the form of waves of infrared radiation.

Trying to find a light echo, van velzen and his colleagues analyzed images of those black holes that have recently burst stars. According to astronomers, they managed to find three objects, from which emanates a powerful flux of thermal radiation at those wavelengths, which are predicted by theoretical calculations.

The very discovery of this radiation and its high power, 10 times the thermal glow of the black hole, suggests that most supermassive black holes in the centers of galaxies is quite thick and surrounds the perforated sphere from the dust, the outer boundary of which is removed from the singularity of 0.3 light-years (3 trillion kilometers).

This sphere and generated by it is the echo, as scientists believe, is a valuable scientific instrument that will allow astronomers to calculate how much energy is released in the time of the destruction of a star by a black hole, and reveal many more secrets of life of these dark objects.