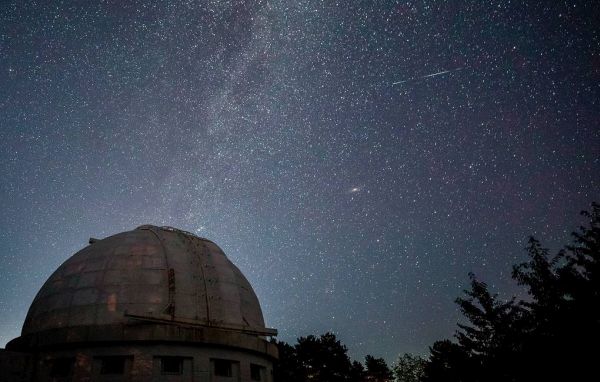 Astronomers have taken pictures of the most ancient “galactic wind” so far. Its source was a supermassive black hole at the center of the ancient galaxy HSC J1243. The light from it went to the Earth for 13.1 billion years. The National Radio Astronomy Observatory of Japan writes about this on its website.

The “galactic wind” refers to the swift currents of hot gas that are thrown out of the galaxy. These streams form a hot bubble around it. Scientists believe that the source of this “wind” is supermassive black holes, which are believed to be located in the center of each galaxy. These winds prevent cold matter from the interstellar medium from entering the galaxy, so they are considered one of the main reasons why about half of the nearby galaxies have stopped producing new stars.

Therefore, astronomers are actively studying how and when the first “galactic winds” appeared. Associate professor at the National Radio Astronomy Observatory of Japan Takuma Izumi and his colleagues came close to answering this question. In a new study, they observed the ancient galaxy HSC J1243, which is located in the constellation Virgo. The light from it went to the Earth for 13.1 billion years.

We see this galaxy in the form in which it was in the first 700 million years of the life of the Universe. Unlike almost all other known ancient galaxies, it does not generate much light and other forms of electromagnetic waves, so it is quite easy to study its surroundings. Izumi and his colleagues studied how clouds of hot and cold gas were distributed in the immediate vicinity of this galaxy with the ALMA microwave telescope, which can track the movement of even the coldest clusters of matter.

In the vicinity of HSC J1243, scientists have discovered many fast streams of hot gas that were moving from the galactic core at a speed of about 500 km / s. Calculations showed that the strength of this “galactic wind” was enough to prevent cold matter from entering the galaxy from the intergalactic environment.

According to the researchers, this discovery suggests that black holes and their ejections began to influence the evolution of galaxies almost from the first epochs of the life of the Universe. Astronomers plan to study other ancient galaxies in a similar way to understand how often black holes have interfered with their growth, and to compare this figure with current values.