Astronomers told about the sudden disappearance of the star 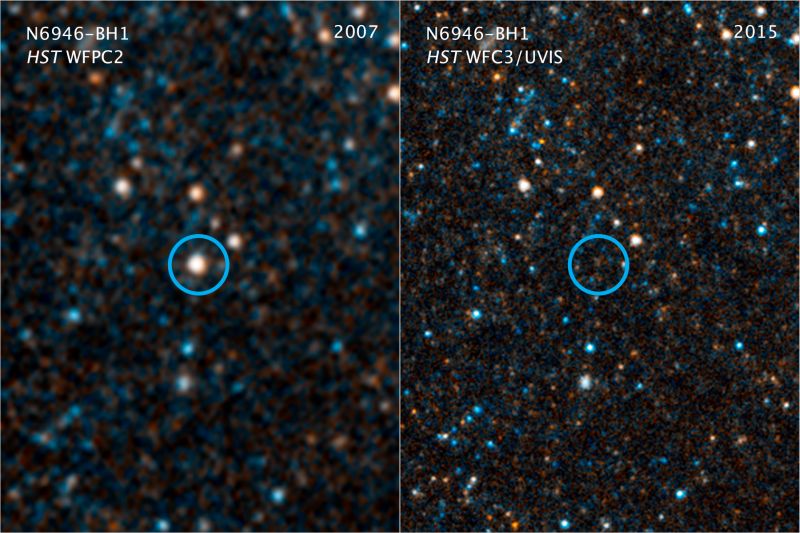 The distant star N6946-BH1 seemed to dissolve in our universe. The reason for this may be a gravitational collapse – the transformation of a star into a black hole.

Star N6946-BH1 was a red supergiant located in the galaxy NGC 6946. The light was removed from our system by 20 million light years, its massiveness was 25 times greater than the Sun. In 2009, the star sharply increased its activity, but then disappeared from optical visibility. Then only the source of infrared radiation was detected. There was a version that it can originate matter, which falls on a black hole.

Now scientists have conducted additional observations on the object N6946-BH, using the ground-based telescope LBT (Large Binocular Telescope), as well as two space telescopes: Hubble and Spitzer. Traces of the luminary were not found, which became additional weighty evidence of the “mysterious” disappearance of the star. Scientists can not yet confidently state the reasons for this. Probably, it is a question of “an unsuccessful explosion of a massive star”. With this development of events, the luminary is quietly “collapsed” into a black hole without becoming a supernova. Researchers say that about 30% of stars similar to N6946-BH1 can thus be transformed into black holes. Meanwhile, it is still difficult to confidently talk about this mechanism.

Perhaps, to answer many questions interesting to experts, new observations will help. The results of the study are presented in the Journal of the Monthly Notices of the Royal Astronomical Society, a brief review was provided by NASA.

A black hole is a region of space-time, the gravitational attraction of which is so great that even objects moving at the speed of light can not leave it. The question of the real existence of black holes is directly related to the general theory of relativity that explains them.