Astronomers took a picture of the cosmic ring of fire 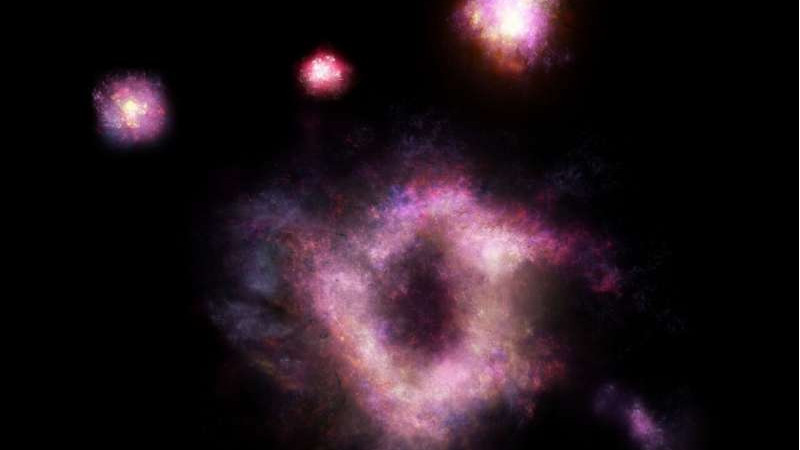 A round galaxy, mass like the Milky Way, with a hole in the middle, and similar to a huge donut. Its discovery is described in the journal Nature Astronomy and is intended to stir up theories about the earliest formation of galactic structures and their development.

“This is a very interesting object that we have never seen before,” said lead researcher Tiantian Yuan of the Australian Center for Advanced Astrophysics in Three-Dimensional ARC Space (ASTRO 3-D). “It looks strange and familiar at the same time.”

“Stars in this galaxy appear 50 times faster than in the Milky Way,” Yuan said. “Most of this activity takes place in the ring – so it really is a ring of fire.” Working with colleagues from Australia, the United States, Canada, Belgium and Denmark, Dr. Yuan used the spectroscopic data collected by the Keck Observatory in Hawaii and images taken by the Hubble Space Telescope to identify an unusual structure.

The data obtained show that this is a collision ring galaxy – the first discovered in the early Universe.

There are two types of ring galaxies. A more common form is formed due to internal processes in the galaxy. The second, collision, is formed as a result of gigantic and violent collisions with other galaxies. In the local Universe, they are found 1000 times less than the first species. Images of the much more distant galaxy R5519 were obtained just 3 billion years after the Big Bang, about 10.8 billion years ago. They indicate that collision ring galaxies are more unusual.

Another co-author, Professor Kenneth Freeman of Australian National University, said the discovery was important for understanding the formation of galaxies like the Milky Way.

“Studying this ring galaxy, we look into the early Universe for 11 billion years, at a time when thin disks were just gathering. By comparison, the thin disk of the Milky Way began to collect just about 9 billion years ago. This discovery indicates that the appearance of disks in spiral galaxies took place over a longer period than was believed, ”