Astronomical April – the opposition of Jupiter, Mercury and the meteor shower of Lyrida 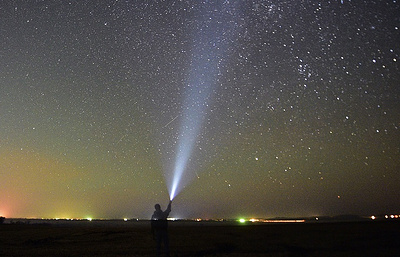 Residents of Russia in April will be able to see several astronomical events – the opposition of Jupiter, the “elusive” Mercury and the meteor shower of Lyrida. This was reported by the member of the board of the Association of Planetarians of Russia, the director of the Ufa Planetarium Anatoly Denisov.

“In the first half of April, you can try to find Mercury at sunset, which is called elusive because of the difficult accessibility for observations.This planet closest to the Sun often hides in its rays and does not move far away.The most favorable time for its observations comes in the period when it In the sky as far as possible from the Sun, “Denisov explained.

According to him, in early April, Mercury will be visible within two hours after sunset, in the west, at the very horizon as a bright asterisk. After a week of good visibility, the glitter of Mercury will drop dramatically, it will be more difficult to find against the background of a light sky. “By the middle of the month, the duration of his visibility will be very shortened,” the source said. “And on April 20 he will enter the bottom connection with the Sun, that is, will be on the line between the Earth and the Sun, ceasing to be visible.”

Jupiter rises in the evening, rising high above the horizon towards the middle of the night, and sets in the morning. It is easy to find, because it is the brightest “star” in the night sky. In binoculars near Jupiter one can see its largest satellites – Io, Europe, Ganymede and Callisto, discovered by Galileo Galilei in 1610. And in the telescope you can see the belts and zones of Jupiter and the famous Great Red Spot, the planetarium director said.

“Such a bright Jupiter will be visible for a long time, only a month later it will diminish its brightness a little.” After the confrontation, Jupiter will rise all the earlier, before the sun sets, and in the evenings it will shine in the southeast with the brightest “star.” Venus, surpassing it In splendor, in April will be the “morning star”, appearing in the morning sky just before dawn, and will not make it a competition, “added Denisov.

A swarm of meteors from Thatcher’s tail

Another significant astronomical event of the month will be the meteor shower of Lyrida, which runs from 16 to 25 April. At this time, the Earth will pass through a swarm of dust particles left by the tail of Comet Thatcher (C / 1861 G1). As a result, dust particles, flying into the Earth’s atmosphere at a speed of 49 km / s and burning, will create a beautiful “falling star” effect.

Lyrids are bright white meteors, they are one of the oldest known meteor showers. The first mention of them dates back to 687 BC. Effective meteor showers Lyrids were observed in 1803 and 1922, and in 1803 it was possible to observe up to 700 meteors per hour. The last high activity of the stream was recorded in 1985 – 200 meteors per hour.
The flow radiant is located on the border of the constellations of Lyra and Hercules near Vega – the brightest star in Lira, explained the speaker.

“This year the maximum of Lyrids is expected in the morning hours on April 22, within an hour should be observed up to 20 meteors.The radiant of the stream is visible all night, but it is best to observe the Lyrids from midnight to dawn when the constellation of Lyra rises high above the horizon, – The waning moon in the phase less than the last quarter will rise only before dawn and will not significantly interfere with the observation of meteors. ”

You can see meteors with the naked eye. “We need to choose a dark place away from city lights and, having patience, look long into the sky to wait for the” shooting star “to click in the sky – a small space traveler will finish his thousand-year path, burning in the earth’s atmosphere,” advised the director of the Ufa Planetarium .