Astrophysicists have found a way to identify transparent ghost stars

The universe can be filled with amazing transparent objects that look like black holes. They are composed of exotic particles. Now astronomers have proposed a way to find such celestial bodies using the same telescopes that gave us the first image of a black hole.

The details are set out in a scientific article published in the Monthly Notices of the Royal Astronomical Society.

Recall that all elementary particles in the Universe are divided into two large classes: fermions and bosons (we told in detail how they differ). The first includes all the constituents of the atom (protons, neutrons and electrons), as well as neutrinos and many other particles. The bosons include, for example, the photon and the famous Higgs boson.

Ordinary matter consists of protons, neutrons and electrons, that is, fermions. But, in addition to ordinary matter, there is also dark matter in the Universe. According to most experts, it consists of particles not yet discovered by experimental physicists. And many of the candidates for this role proposed by theorists (for example, axion) relate to bosons.

If there really are bosons in space that have not been found on Earth, then can entire celestial bodies (the so-called bosonic stars) consist of them? This possibility has been studied by specialists for a long time.

Scientists are discussing the properties of bosons that could allow them to collapse into large objects. So, it was found that for this, the particles must have a nonzero, but still very small mass: less than 10-17 electron volts (recall that physicists often measure the mass of particles in energy units, using the famous formula E = mc2). So far, experimental physicists do not know anything about the existence of such bosons, but, as they say, it is not over yet.

But, if bosonic stars do exist, what should they look like to an observing astronomer? Surprisingly, black holes. It has even been hypothesized that some of the objects that we mistake for supermassive black holes are in fact bosonic stars.

Like black holes, such hypothetical bodies can have a huge mass at a relatively modest size. They also do not emit any radiation of their own. True, bosonic stars are not black, but transparent. That is, they do not absorb light, but freely pass it through themselves. But in the eternal darkness of space, it is equally difficult to notice both an absolutely black and an absolutely transparent object, and even more so to distinguish them from each other. 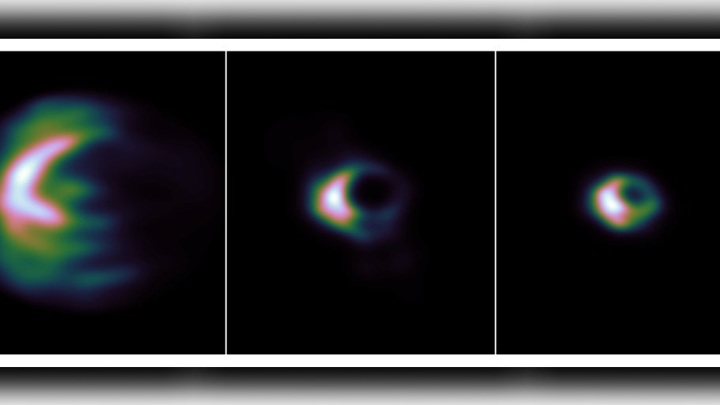 Results of modeling the shadow of the central object of the galaxy M87, depending on the nature of this object.

Peering into the shadow

However, there is a way out. We usually observe supermassive black holes due to the glow of matter falling on them. And here, according to the authors of the new study, lies the possibility of distinguishing them from bosonic stars.

Recall that in 2019, astronomers received the first direct image of a black hole – a supermassive monster in the center of the M87 galaxy. This object is surrounded by a cloud of matter falling on it, which intensely emits radio waves.

The observers used the Event Horizon Telescope (EHT) radio telescope system, consisting of eight antennas separated by thousands of kilometers. Such a network was able to distinguish very fine details. If it were an optical telescope, it would be possible to read a newspaper located in Vladivostok from Moscow through it. Thanks to this, astronomers discerned a black hole at the center of the surrounding radiating cloud.

More precisely, the EHT was not observing the very surface of the black hole (the event horizon), but the so-called shadow. This is a dark region that forms due to the effect of the black hole’s gravity on the surrounding photons. The black hole is located in the very center of the shadow and is several times smaller in radius.

The authors of the new article asked the question: what would the EHT “see” if in the center of M87 there was not a black hole, but a bosonic star?

To do this, the researchers simulated the radiation of matter falling on a bosonic star. As expected, the bosonic star was very much like a black hole in this respect. Yet astrophysicists have found differences.

Thus, it turned out that a bosonic star of the same mass as the central black hole M87 would have a shadow of a much smaller diameter. Based on the actually measured diameter of the shadow, we can say with confidence: we still have a black hole in front of us.

However, the EHT collaboration is not going to stop at the observation of M87. The next step is to study the central objects of other galaxies. Perhaps one of them will have a shadow that is too modest for its mass. And this will be a reason to suspect that this is actually a bosonic star.