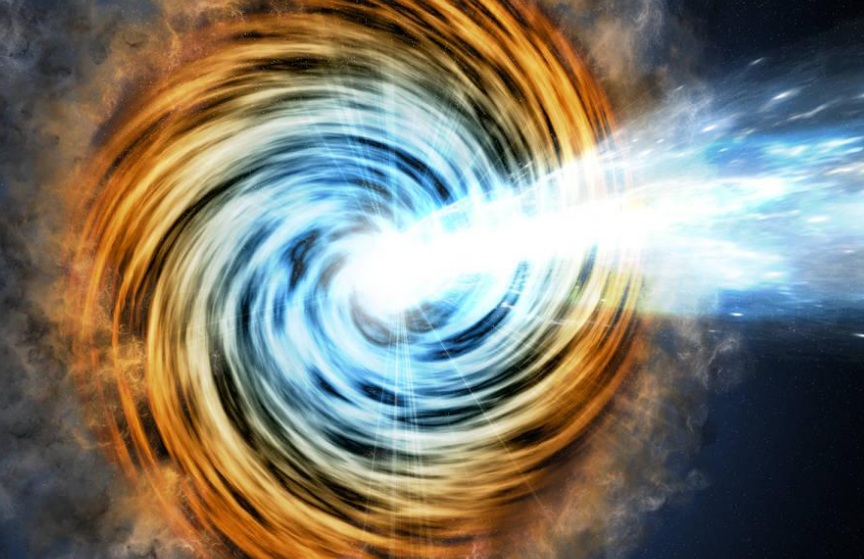 Two American orbital observatories Swift and Fermi recorded two powerful gamma-ray bursts that reached us from the outskirts of the Universe. The results are published in three articles in the journal Nature on Wednesday, November 20.

Scientists suggest that gamma-ray bursts occur in the last instant before the death of large stars. When they die, the attractive force of the black hole generated by them turns out to be so high that the remains of the bodies do not scatter around the surrounding space, but merge into one disk.

Part of it will be absorbed by a black hole, and the remnants are accelerated to the speed of light and burst out by a powerful stream of charged particles in the form of beams of matter. At this moment, a powerful stream of energy erupts from the dying star, which the Sun and other small stars generate their entire existence.

It is not known what accelerates and spins matter into such bundles. Researchers, observing the most powerful gamma-ray bursts, calculate the exact distances to the sources of space disasters.

As the astrophysicist from the DESY German Synchrotron Center, Constance Satalesk, observes that it was difficult that the Earth’s atmosphere absorbs almost all traces of gamma radiation – they simply did not reach the telescopes. Therefore, observations of such phenomena were carried out from orbital observatories, as well as the Russian instrument “Cone”, which is installed on board the American satellite Wind.

On November 9, the NASA telescope recorded an unusual signal. According to experts, in 20 seconds the same amount of energy was released as the sun produces in 10 days.