Astrophysicists have solved the mystery of the origin of gold 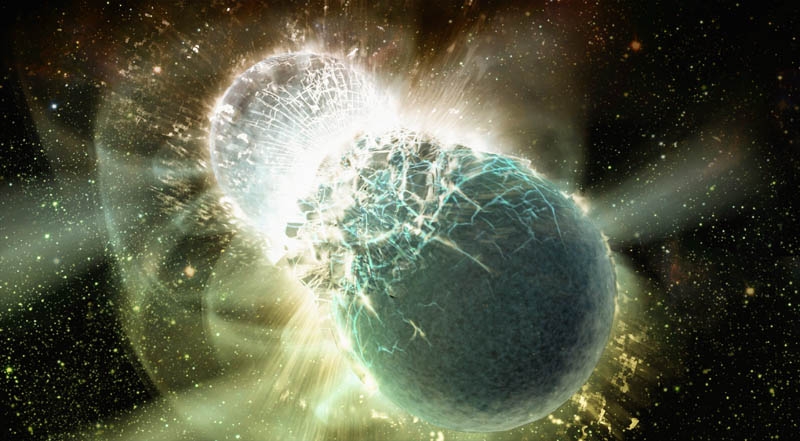 The study of the dwarf galaxy, crammed with heavy elements, has allowed scientists to figure out that the main sources of gold may be a dying neutron star.

Initially, in the Universe there was only the lightest atoms, hydrogen with small amounts of helium. The entire set of elements up to iron came from them as a result of the thermonuclear reactions occurring and continues to occur — in the depths of many generations of stars. However, the birth of more heavy elements, including gold or uranium, require more severe conditions, reports Naked Science.

More than half a century ago, theorists have described a possible mechanism of their formation. This r-process, during which a freely moving neutrons are captured by nuclei of the iron atoms accumulate in it. Some of the neutrons can then lose an electron, becoming a proton and forming heavier nuclei. Calculations show that this capture must happen quickly — faster than the decay of unstable isotopes of iron with an increased number of neutrons. It requires special conditions of occurrence of the r-process, and it is believed that in space it can be realized directly before the explosion huge supernova or in a shock wave of this explosion in merger of pairs of incredibly dense neutron stars and other very extreme circumstances.

This pattern is common in astrophysics, however, remains largely theoretical. In particular, what contribution to the content of the Universe these elements make supernova, and some mergers of neutron stars, remains a subject of debate. These disputes have evolved as a result of new observations of the dwarf galaxy II Grid open for just about a year ago. Mesh II — one of the many small satellites of the milky Way and is only 98 000 light years from Earth. And it is chock-full of elements heavier than iron.

Notice it has managed astronomers from the Institute Kavli used located in Chile, the telescopes of Las Campas. Watching seven of nine’s biggest and brightest stars Mesh II, they noted the abnormally high content of elements heavier than iron. This is an extremely unusual feature, sharply distinguishing the Grid II on the background of neighboring dwarf galaxies. In an article published by the journal Nature, the authors put forward an assumption about what kind of powerful event in the distant past, Mesh II was able to infuse it with such elements.

The fact that the number and relative composition of heavy elements born by a supernova explosion or a merger of neutron stars, can vary. “The explosion of a star with a mass eight times more solar will create a gold weight around with the moon,” explains Professor University of California Santa Cruz Enrico Ramirez-RUz. — The merger of neutron stars will generate as much gold as it weighs the whole Jupiter. The scientists found the amount of heavy elements in the Grid II shows exactly the neutron star as the primary source of such nuclei. At least in dwarf galaxies.