Astrophysicists have tracked as neutron stars “fade into the background” 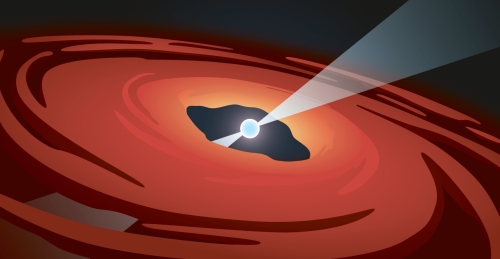 The international team of astrophysicists into which the Russian scientists entered has photographed very quickly dying away radiation of pulsars after powerful flashes — transition to the so-called mode of the propeller. Theoretical predictions of this effect have been made more than forty years ago, but only now this phenomenon has been for the first time authentically registered for pulsars 4U 0115+63 and V 0332+53, radiating in the x-ray range.

Pulsars 4U 0115+63 and V 0332+53 belong to special type of sources — flashing (or tranziyentny) to x-ray pulsars. They gleam in the x-ray range, brightly flash, and even absolutely vanish. How pulsars pass from one state into another, it is possible to judge their magnetic fields and temperatures of surrounding substance. Values of these parameters are so high that they can’t be received and measured directly in terrestrial laboratories.

The name of a pulsar begins with a letter which designates the first observatory which has found him, and then there are figures — pulsar coordinates. “V \— it is the Vela 5B satellite, the military American satellite intended for tracking the territory of the USSR. “4U”, in turn, it is deciphered as “the 4th UHURU catalog”, the first specialized x-ray observatory in an orbit. And when have opened the first pulsar, it was initially called by LGM-1, from “little green men” (“little little green men”): he sent radio impulses at regular intervals, and researchers have decided that it can be a signal from reasonable civilizations.

The x-ray pulsar represents quickly rotating neutron star with strong magnetic field. The neutron star can form couple with a usual star and draw on itself her gas — astrophysicists call it accretion. Gas a spiral twists around a neutron star, forming an accretionary disk, and is braked on border of a magnetosphere of a neutron star. Substance at the same time gets in a magnetosphere a little, “vmorazhivatsya” in it and flows down on magnetic lines to poles. Falling on magnetic poles, it is warmed to hundreds of millions of degrees and radiates in the x-ray range. As the magnetic axis of a neutron star is at an angle to a rotation axis, X-rays rotate like beams of a beacon and “from the coast” look as the repeating signals with the period from thousand fractions of a second to several minutes.

Neutron star — one of the possible remains from flash of a supernew star. At the end of evolution of some stars their substance because of gravitation compresses so strongly that electrons actually merge with protons and form neutrons. Magnetic field of a neutron star can exceed the most achievable on Earth in tens of billions of times. 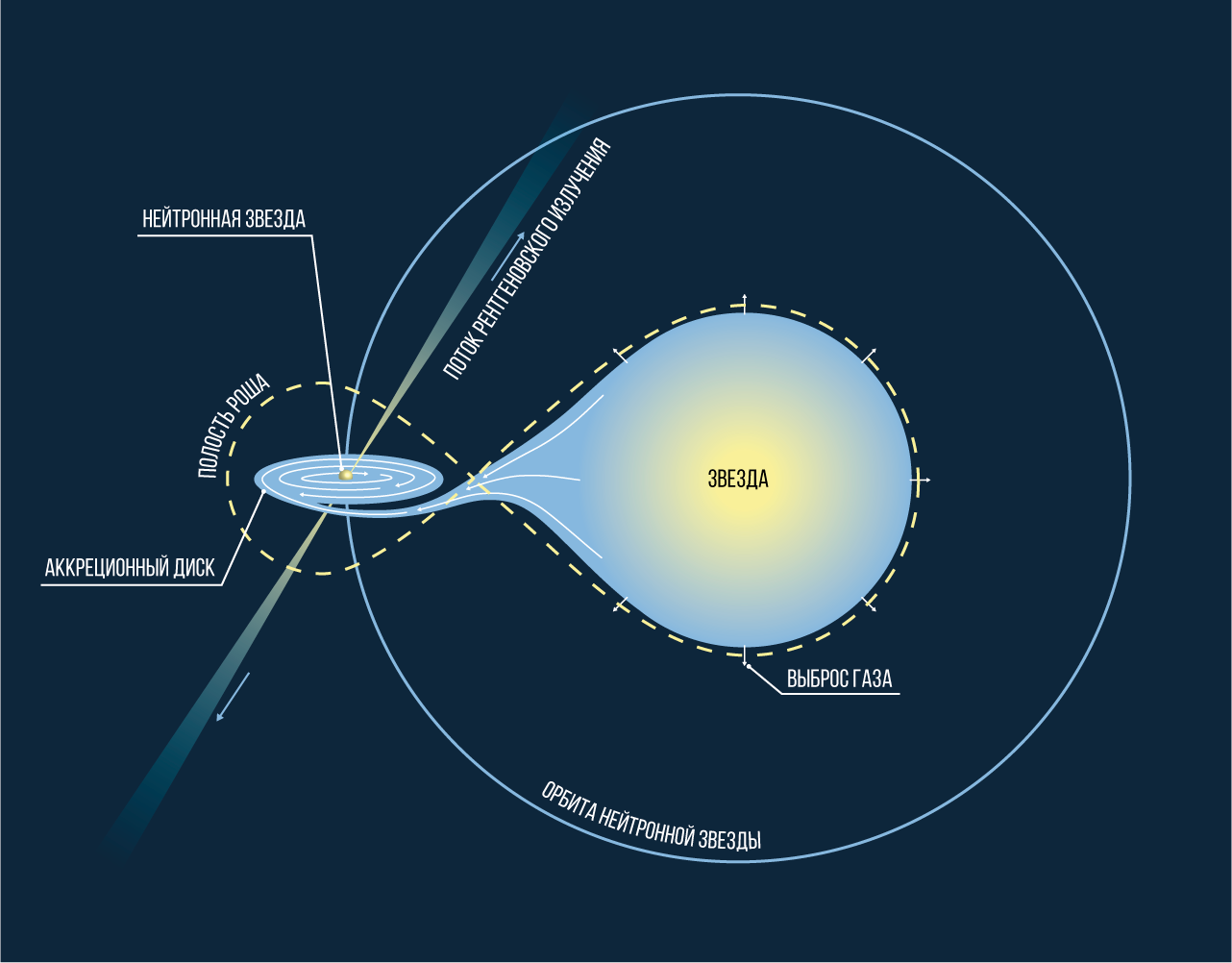 That in system from two stars the x-ray pulsar was observed, matter has to flow from a usual star on neutron. The usual star at the same time can be giant or a supergiant and to possess powerful star wind, that is to throw out a lot of substance in space. Or it can be a small star like the Sun which has filled the cavity of Roche — area, abroad which substance isn’t kept by force of an attraction of this star any more and is drawn by gravitation of a neutron star.

X-ray pulsars 4U 0115+63 and V 0332+53 radiate so unstably (i.e. show flashes of radiation) because at each of them quite unusual star partner — a star of a class of Ve. Ve-zvezda rotates round its pivot-center so quickly that from time to time at her “the skirt rises” — along the equator the gas disk is formed and grows — and the star fills Roche’s cavity. Gas begins to akkretsirovat promptly on a neutron star, intensity of its radiation sharply increases, there is a flash. Gradually “skirt” wears out, the accretionary disk is exhausted, and substance can’t fall on a neutron star because of influence of magnetic field and centrifugal forces any more. There is a so-called “effect of the propeller”. In such mode accretion doesn’t happen and the x-ray source vanishes.

By means of the x-ray telescope on space observatory of Swift the Russian scientists could measure threshold intensity of radiation, that is, luminosity below which the pulsar passes into “the propeller mode”. This size depends on magnetic field and on the period of rotation of a pulsar. The period of rotation of the studied sources is known on measurement of time of arrival of the impulses radiated by them — 3,6 sec. for 4U 0115+63 and 4,3 sec. for V 0332+53 that has allowed to calculate tension of magnetic field. Results have coincided with the values received by other methods. However luminosity of pulsars has fallen not by 400 times, predictably, and only by 200 times. Authors have assumed, something the surface of a neutron star heated by flash is cooled and by that is an additional source of radiation, or the effect of the propeller can’t block completely a substance overflowing from a usual star and there are other channels of “leak”.

Transition to the mode of the propeller is very difficult audible as in this mode the pulsar almost doesn’t radiate. During last flashes of sources 4U 0115+63 and V 0332+53 was already attempt to catch this transition, but because of low sensitivity of devices “the switched-off state” available at that time it wasn’t succeeded to mark. Reliable confirmation to the fact that these pulsars “are really switched off” is received just now. Moreover, it is shown that information on transition to “the propeller mode” can be used for definition of tension and structure of magnetic field of neutron stars.

Alexander Lutovinov, professor of RAS, the doctor of physical and mathematical sciences, the head of the laboratory at Institute of space researches of RAS and the teacher of MIPT explains: “One of fundamental questions of education and evolution of neutron stars is the structure of their magnetic fields. In the course of the research we have defined a dipolar component of magnetic field which is just responsible for effect of the propeller for two neutron stars. We have shown that this independently received size can be compared to the size of magnetic field already known on measurements of cyclotron lines, and thus to estimate a contribution of other components of higher order which are included into structure of the field”. Results of measurements, calculations and conclusions are published in the Astronomy & Astrophysics magazine.