At the equator of Mars, water deposits 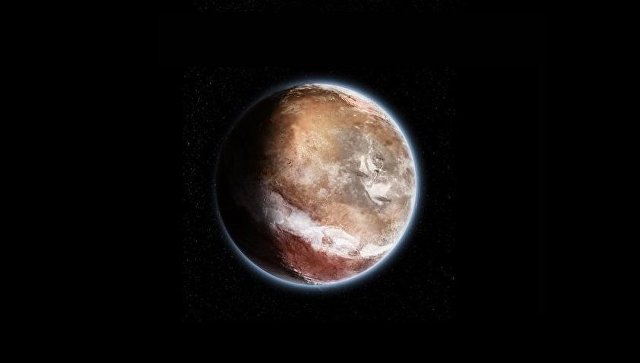 A reanalysis of the images from the Mars Odyssey probe showed that a significant amount of ice can be hidden on the equator of Mars, indicating that in the recent past the red planet rotated almost on its side, scientists say in an article published in the journal Icarus.

“We managed to improve the quality of the data as if we had halved the orbit height of the probe.We already knew that the ice deposits are present in the circumpolar regions of Mars and now we have found small deposits of frozen water and at the equator of the planet,” says Jack Wilson Wilson) from the University of Durham (UK).

In recent years, scientists have found many hints that on the surface of Mars in ancient times there were rivers, lakes and whole oceans of water containing almost as much liquid as it was in the Arctic Ocean. At the same time, some planetary scientists believe that even in ancient times Mars could be too cold for the constant existence of the oceans and water on the planet could be in a liquid state only at the time of volcanic eruptions.

The discovery of traces of the most powerful oceanic tsunami on Mars, as well as some other data on its geology, make many researchers believe that liquid water could exist on Mars not always, but occasionally, when large meteorites fell on Mars or when its volcanoes melted melting the ice that surrounded them . Meltwater streams could break through giant channels on the surface of Mars and form temporary oceans and lakes that did not freeze hundreds of thousands and millions of years.

Wilson and his colleagues tried to uncover one of the strangest “water” mysteries of Mars – why relatively “fresh” traces of water flows occur not only in the temperate latitudes of the red planet, but also at its equator, where ice and liquid water can not in principle exist More than three billion years.

To search for an answer to this question, scientists studied hydrogen distribution maps in the soil of Mars, obtained with the MONS instrument on board the Mars Odyssey probe. It has a sufficiently low resolution, which is why, as Wilson and his colleagues explain, small pools of water will remain almost invisible to him if they are surrounded by completely dry soil.

The authors of the article were able to eliminate this deficiency and at times increased the sensitivity of MONS using special statistical analysis techniques that allow to extract additional information from each “pixel” of the image perceived by it, comparing their contents with neighboring “cells” on the map of Mars and considering how it works Optics of this detector.

Using such algorithms, astronomers were able to radically increase the quality of maps prepared with the help of MONS, and to discover previously unknown deposits of ice in the tropics and at the equator of Mars. Similar deposits were found in the Medusa cavity, which was previously filled with sediments of porous volcanic rocks, as well as on the slopes of the Farsida Mountains in the northern tropics of the red planet.

According to scientists, the presence of large enough ice reserves near the equator of Mars, comparable to the volume of the southern ice cap of the planet, indicates that in the past the axis of its rotation was strongly tilted. According to Wilson, Mars had to rotate almost on its side, with an axis tilted 45 degrees, so that these ice reserves could form or survive on the relatively warm equator of the red planet.

Such a conclusion is in good agreement with the fact that the axis of rotation of Mars really should have shifted significantly in the past after the appearance of the Olympus volcano and other major mountains on the plateau of Tarsida. Now it is almost at the equator of the planet, but in the past, judging by the pattern of rivers on its surface, this plateau was located in the temperate latitudes of the northern hemisphere of Mars.

On the other hand, the measurements of Wilson and his colleagues contradict the data obtained with the help of the rovers Curiosity and Opportunity, until they found traces of water in the equatorial latitudes of the red planet. Therefore, discussions about the origin of the Martian “rivers” will not abate and will continue with a new force, scientists conclude.