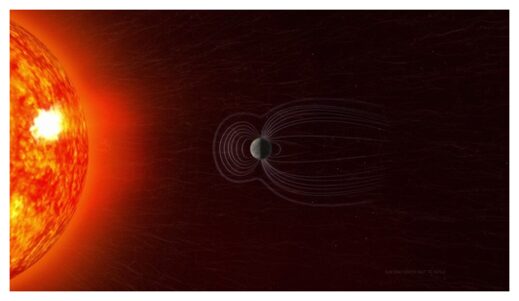 About 41,000 years ago, something global happened: the Earth’s magnetic field turned over, and for a while, magnetic north became south, and magnetic south – north.

Paleomagnetists call this geomagnetic travel. This event, which differs from a complete reversal of the magnetic pole, occurs irregularly in time and reflects the dynamics of the molten outer core of the Earth.

The strength of the Earth’s magnetic field almost disappeared during an event called Lashan’s excursion, which lasted several thousand years.

The Earth’s magnetic field acts as a shield against high energy particles from the Sun and beyond the Solar System. Without it, the planet would be bombarded with these charged particles.

We do not know when the next geomagnetic excursion will take place. But if it happened today, it would be terrible.

Satellites and navigation apps will be useless and the power distribution system will be destroyed.

Obviously, 41,000 years ago, satellites and electrical grids did not exist. But an excursion to Lasham, named after the lava flows in France where it was first discovered, still left its mark.

Scientists recently discovered its signature for the first time in Australia, in a 5.5m sediment core taken from the bottom of Lake Selina, Tasmania.

In these seeds lies 270,000 years of history, which scientists described in an article published in the journal Quaternary Geochronology.