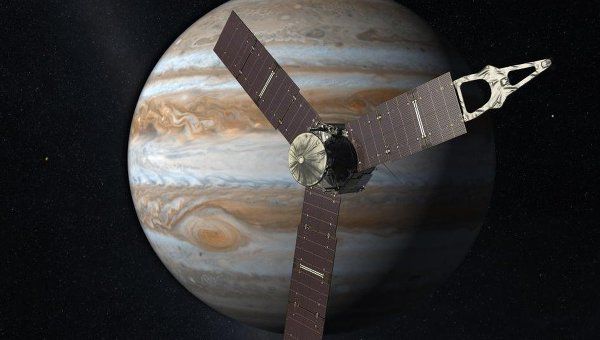 Launched August 5, 2011, space station American space Agency has reached the limit at which the gravitational attraction of Jupiter “overshadows” the attraction of the Sun.

Juno will be released on a stable orbit around Jupiter by 4 July, will make for one earth year is not less than 37 turns, will collect data about the chemical composition of the giant planet, studying its gravitational and magnetic fields, will carry images of the southern and Northern poles.

The trajectory of the station meant a revolution around the Sun and then get an additional acceleration away from Earth. During rapprochement with their native planet, the station experienced a work of optics in South America.

Interesting is the fact that the research equipment of the station has no single direction, forcing the station in orbit of Jupiter to have their own spin to each of the scientific instruments was able to complete its task.

The unit also has on Board completely useless for his mission items: three LEGO figures made from aluminium and the plate weighing 6 grams, is dedicated to Galileo Galilee. Questionable joke given the financial cost of the mission.

The loss of the device is scheduled for February 2018, when he was sent into the atmosphere of Jupiter where it will burn.