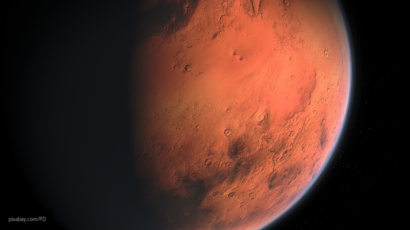 This March on Mars is bad weather, unusual even for the harsh climate of the red planet. Last week, NASA’s planetologists observed on Mars the second giant dust storm that erupted just two weeks after the previous one ended.

The data obtained by NASA’s Mars Reconnaissance Orbiter (MRO) orbiter allows one to judge the geography and strength of these storms. The scale is impressive: both cataclysms began north of the equator, and then advanced to the southern hemisphere of Mars; Both spread to a territory larger than the United States. Such a route is common for the Martian thunderstorms, but the frequency and scale are not.

While it is not clear what factors affect the scale of the Martian storms. On the planet are constantly emerging small hurricanes, slightly smaller than large ones, while global ones appear quite rarely.

Until now, scientists have observed the highest frequency of global storms in spring and autumn, when Mars passes closest to the Sun. Given that the orbit of Mars changes approximately every 100,000 years, it can be assumed that in the past, the Sun was the most intensely heated by other parts of the planet and the winds were not born in those areas where it is happening now.

When changes in temperature and pressure give rise to strong winds, particles of sand and dust rise into the air. Only the lightest of them rise so high that they are entrained by the vortex currents of the upper layers of the atmosphere; Flows of such particles give rise to global dust storms. In the whole history of the study of Mars, scientists learned of only a few such events; The last until this year occurred in 2007.

There is an assumption that part of the matter in the upper layers of the atmosphere of Mars comes not from the surface, but from other celestial bodies – for example, from the satellites of Mars Phobos and Deimos or comets passing by Mars; However, while there is no sufficient evidence of this theory.